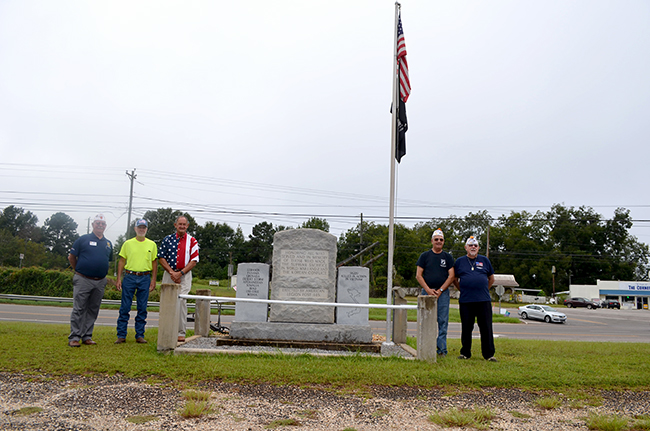 Jaine Treadwell | The Messenger Saturday morning, American Legion Post 145 in Brundidge dedicated a memorial marker to all who served America with pride and honor and those who made the supreme sacrifice for freedom. Department of Alabama Leadership Commander Buddy Keen was the guest speaker. Pictured, from left, Keen and Post 145 members, Ashley Davis, Steve Carter, Gerald Murphy and Freddie Turner.

American Legion Post 145 in Brundidge hosted a dedication service for a memorial marker at its post home on Highway 231 south of Brundidge on Saturday morning.  The marker honors all who served and is in memory of those who made the supreme sacrifice in World War I, World War II and in the Korean Conflict.

The marker is a memorial to America’s 58,220 who were killed in Vietnam. Also memorialized are those who served in Lebanon, Panama Grenada, Desert Storm, Afghanistan, Somalia, Iraq, USS Cole and Bosnia.

Commander Buddy Keen was the featured speaker that the dedication service.

Keen said it is always an honor to acknowledge those who have served in the United States of America military so admirably and to remember those who paid the supreme sacrifice in service to their country.

“I find inspiration in the service of those who persevered and honor those who died in service to their country,” Keen said. “They answered the call so that justice might be served.”

Keen expressed his appreciation to American Legion Post 145 for the importance placed in the carrying forth of the memory of those who paid the supreme sacrifice in service to their country, the many who have served and those who continue to serve.

The dedication and commitment of American Legion Post 145, Keen said, is an example of veterans supporting veterans.

Keen said veterans do what they do, and all they do, “for the cause, not the applause.”

“Veterans give with their hearts,” he said. “Always.”