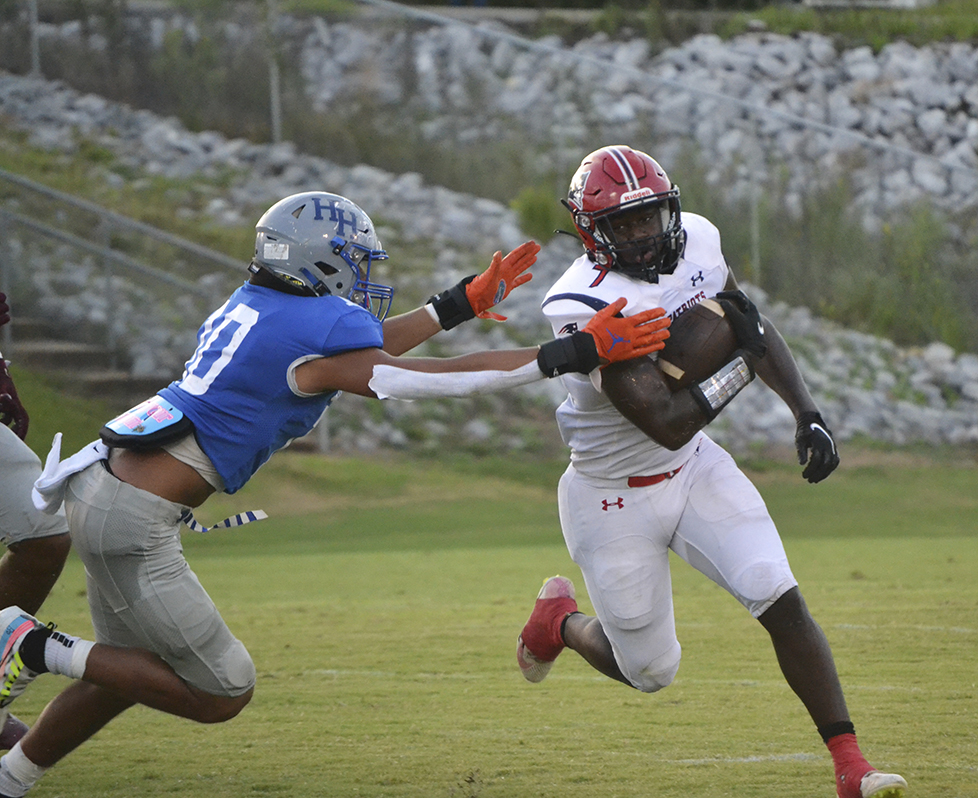 Pike running back Nemo Williams (7) made his presence felt in the preseason jamboree. (Photo by Josh Boutwell)

The Pike Liberal Arts Patriots will open the 2022 regular season this Friday, Aug. 19, on the road at the Mobile Christian Leopards.

Unlike the majority of Pike’s 2022 schedule, this matchup won’t be a first-time showdown as Pike and Mobile Christian met in the 1990s and 2000s as a part of the AISA. This is, however, the first regular season game in the Alabama High School Athletic Association (AHSAA) for PLAS.

Pike got a little taste of the AHSAA last week in a preseason jamboree at Highland Home, however, falling 18-0 in a tough game. While the score may not seem like it, the Patriots held their own with 2021 Class 2A Semifinalist Highland Home late into the game.

“I think that we competed our tails off,” Pike coach Travis Baxley said. “I think one of our goals was to go into this game and be physical, win the line of scrimmage, run the ball and shut down their run game.

“In those areas I think we get an A+. I wanted to see us compete and weather the storm as far as bad things happening to us and we did that, too. I’m very pleased, not necessarily with the outcome, but with the way we went about our business.” 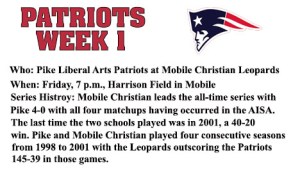 One thing the Patriots struggled at against Highland Home was turning red-zone trips into points. PLAS had the ball in the Flying Squadron red-zone on four separate occasions and turned the ball over on two of those trips, while not turning any of them into points.

“We have to capitalize when we get it down there and execute,” Baxley emphasized. “That is 100 percent the main focus this week.”

Pike had a number of players that stood out in the Preseason Jamboree, including senior safety KC Bradford who grabbed two interceptions and recovered a fumble. Sophomore Nemo Williams, however, has received plenty of attention following the game he had. Williams rushed for 123 yards on 20 carries on offense and notched seven tackles, four tackles-for-loss, a sack and nine quarterback hurries on defense.

While this is also Mobile Christian’s season opener, the Leopards come into 2022 as the Class 3A No. 7 ranked team in the Alabama Sports Writers Association’s (ASWA) Preseason Poll. The Leopards are dropping down from Class 4A, where the school went 9-2 in 2020 and 5-6 in 2021 with playoff appearances in both seasons.

Mobile Christian was once an AISA program like Pike, winning the 1995 AISA AAA State Championship, but joined the AHSAA in 2006 and since that time has made the playoffs in 13-of-16 seasons in the public school game. In 2019, the Leopards finished Class 3A Runner-Up, falling to Piedmont in the State Championship game.

“I expect to see a talented, well-coached team whose program is at the top of their game,” Baxley said of his opponent. “Mobile Christian is sort of who we want to model ourselves after and who we want to emulate as we take strides to get our program to where we want it to be. It will look a lot like Mobile Christian when we get there.”

Pike and Mobile Christian will kickoff at 7 p.m. from Harrison Field in Mobile on Friday night.