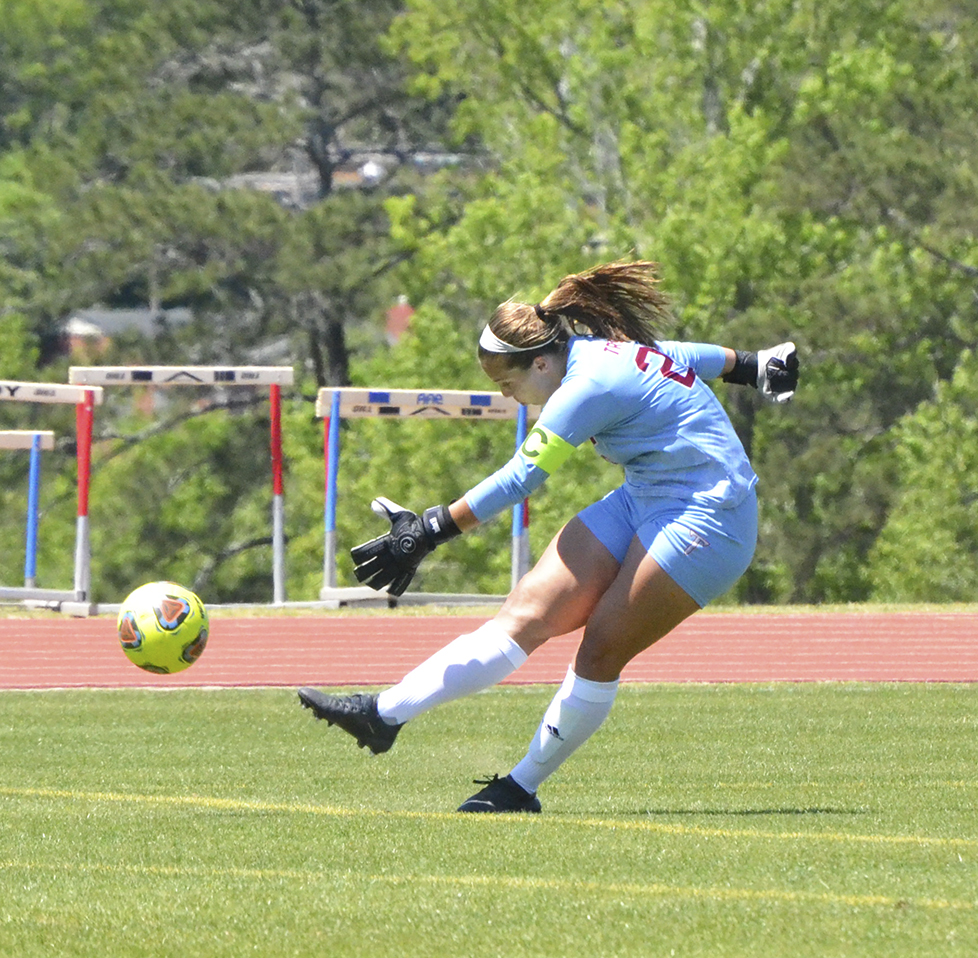 All-Sun Belt goalkeeper Lindsey LaRoche is one of Troy’s captains in 2022. (Photo by Josh Boutwell)

The Troy Trojans soccer team is coming off a 4-0 spring schedule and is geared up to improve on the frustrating 2021 season as the 2022 season fast approaches.

New Troy coach Robert Lane joined the program in January and hit the ground running but owes the success of the spring schedule to his players.

“I was a fresh face in January, so the girls did a great job of acclimating to what the expectations were from us as a staff and I didn’t really have to do a whole lot,” Lane emphasized. “They were coming off what they considered to be a disappointing year, so it didn’t take much to motivate them.

“Based on everything we’ve done, in terms of fitness test results in the preseason, everyone worked extremely hard over the summer to stay motivated and keep each other motivated to be ready for the fall season.”

“They join a group of about seven on our leadership council,” Lane said of his captains. “From an experience standpoint, Detlefsen is a fifth-year player and the other two are juniors with a lot of experience. Those girls and quite a few other people are emerging with different voices (as leaders) at different times.”

The Trojans also picked up former Georgia midfielder Jocelyn Hugo, Chicago State forward Jala Gage and High Point midfielder Ashley Rainho from the transfer portal. Lane was familiar with all three players when he got to Troy.
“The timing of when we came in made it difficult to find any more remaining young talent based on how recruiting works. So, for us finding more freshmen was going to be tough but we felt like we could get on the transfer portal a little bit,” Lane recalled. “We actually had Jala Gage come in January when I came in and I knew her from recruiting her out of high school.

“Hugo was a player I coached at Georgia, so I was quite familiar with her and she was familiar with our staff and how things run and it worked out to add her to the mix. Ashley Rainho is a player that fit our identity as a program and style we want to play with, too. She’s a technically gifted midfielder and they’ve all three been great and will all three be impactful players for us in their own ways. They have experience playing at this level and playing in big games.”

Troy held its first exhibition of the season last Saturday against Samford and will hold another exhibition game against Montevallo this Saturday before the regular season begins next week.

“There is a lot of positive momentum for us but it’s still early days and we’re still learning each other, learning our personnel and learning our tendencies,” Lane said. “We still have a lot of work to do and we’re taking it in small steps. We’re trying to focus on the next month to get us ready for the conference season. We’ll use those non-conference games to prepare us for the Sun Belt opening.”

Offense will be a key focus for the Trojans early in the season.

“We have to be more consistent putting the ball in the back of the net and a lot of that is through our system and through personnel, combinations of players that works the best together,” he said. “We talk a lot about being defined by how we defend and that allows us to stay in games but we have to become a more dangerous and dynamic team in the final third. The first week of preseason we spent focusing on the defensive side of the ball and this week has been more about how we stick the ball in the back of the net.”

Having his team ready for conference play in September is Lane’s main focus heading into the season.

Despite the newcomers, returning players and a successful spring schedule, the Sun Belt Conference’s coaches’ voted Troy to finish in last place in the West Division. That fact has not sat well with the Trojans.

“I don’t pay much attention to that but the girls in the (locker room) certainly do and I think there has been some choice words when we talk about it,” Lane said with a smile. “At the end of the day, those predictions are the same as the words our players have in regards to those predictions. If you don’t go out and speak with your actions on the field it doesn’t really mean a whole lot.

“We really challenged them to say if you don’t like it then change it and they’re the ones that can go out and take pride in the jersey they put on and the performance they put on and change it. I, personally, think it was a bit of a slap in the face and it’s humbling at the same time, but I’m also confident this group of young ladies has a lot to prove and will have their chance to have their say so.”

Troy hosts Montevallo at 1 p.m. on Saturday, Aug. 13, and admission is free, as it will be for all home games this season.