“The Free Enterprise Scholars program in the Johnson Center is unique among academic opportunities at universities because of its bold embrace of free market teachings,” said Dr. Allen Mendenhall, Associate Dean of the Sorrell College who oversees the Johnson Center. 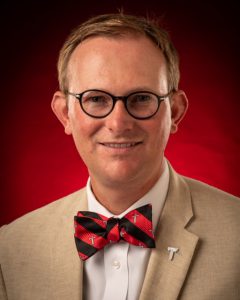 “I hear from friends working for corporations in Birmingham and Atlanta who are afraid that woke ideologies are creeping into their offices and board rooms. They question why their employers are taking positions on controversial issues–unrelated to their apolitical business–that could alienate consumers,” he said.

The Free Enterprise Scholars will participate in the Johnson Center’s fall and spring reading groups, attend a monthly MJC event and write an op-ed about free enterprise. Along with that, scholars will take a Moral Foundations of Capitalism course, attend academic conferences, and take field trips.

Another focus of the program is to secure fundraising from individuals and organizations looking to impact free-market education by supporting Scholars’ activities and providing funding for an M. Stanton Evans Annual Lectureship, featuring journalists who write about free enterprise.

Evans, who died in 2015, was noted as “an early leader of the conservative movement” by the New York Times. In college, he acted as editor of the Yale Daily News and became editor of the Indianapolis News at 26. He was a commentator for CBS and NPR and was a syndicated columnist whose work appeared in large papers nationwide, including the Los Angeles Times. In 1977, he became the founding director of the National Journalism Center in Washington, D.C. He authored 11 books. In 1980, Evans took on a role as visiting professor at TROY, a role he kept until 2010.

“I fully support and appreciate the Johnson Center taking a bold stand to demonstrate and celebrate the virtues of free markets, commerce and business,” said Sorrell Dean Dr. Judson Edwards. “We are confident the Free Enterprise Scholars will grow expeditiously and provide a needed platform for open dialogue about the ever-increasing number of employees being negatively impacted by intolerant environments found in much of corporate America today. I am certain that if my friend and mentor Stan Evans was still with us, he would be the first person to help in its launch and support its continued success.”