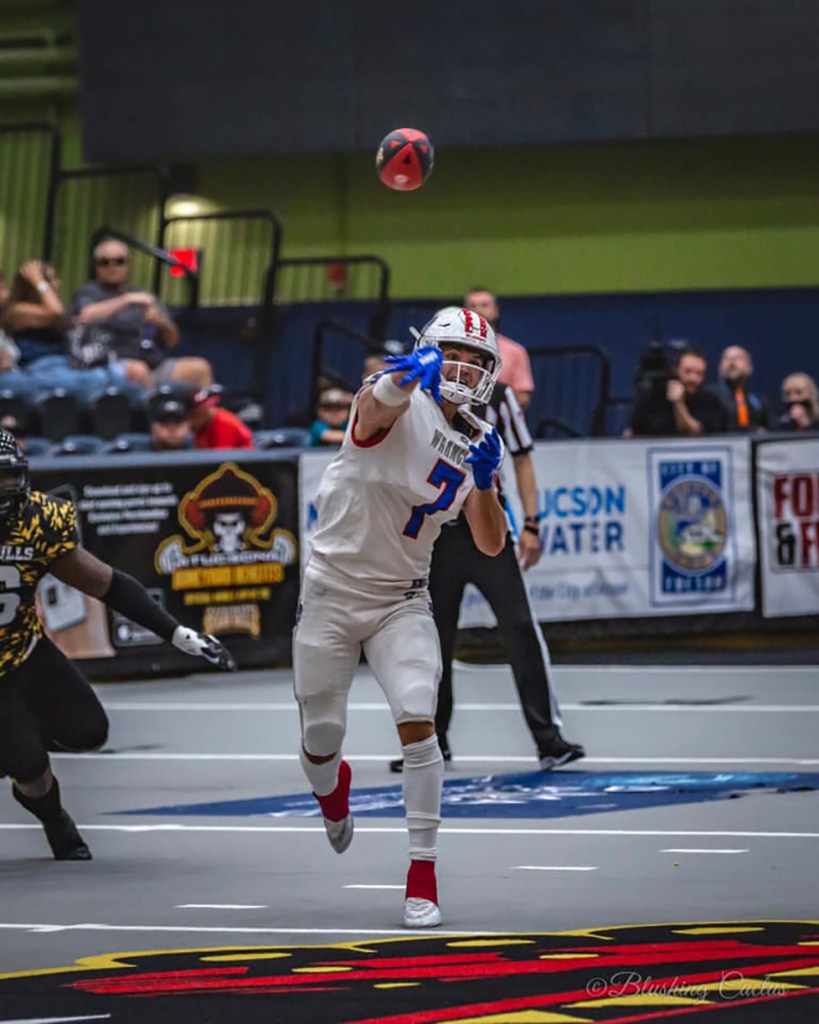 A rookie leading his team into a championship game is a unique feat for any level of football but when it’s a completely new game for a player it’s an even more special occasion. This year marked Barker’s first steps in indoor football and it’s been a successful one.

“It’s been quite a journey I would say,” Barker said. “Learning a new game, learning the speed of the game has been a journey for me. There is elite talent in this league, too.

“There’s former NFL guys, SEC guys, Division I guys and Division II guys here. Some of the guys just want to continue to play football for fun and other guys like myself are trying to get more film to further their career and make more money in a bigger league. It’s been a pretty good experience.”

Barker was an All-Sun Belt player at Troy, throwing for 3,628 yards and 30 touchdowns as a senior despite coming off an ACL tear and even more injuries in his junior season. Those injuries led to Barker believing his football career was done after college.

“I didn’t even think about playing football since I left Troy,” said Barker. “This opportunities presented itself and I talked it over with my family and felt like I’m still young, so why would I not give it a chance and see where I could take it?”

Indoor football is a unique sport, however, with it’s own set of rules and style of play. First, and foremost, the field is only 50 yards long and walls that act as the sideline surround the field. The more condensed field makes for a much faster game, as well.

“The speed of the game is faster with the field being smaller,” Barker said. “I would say necessary the players are faster, but everything happens a lot faster than outdoor football. You’re making your reads faster and everything has to be on time.”

Barker has acclimated so well to the game that he ended the season with 2,139 yards and 45 touchdowns, fourth in the entire league. Barker has always been an elusive quarterback, willing to tuck the ball and run, but due to his injuries at Troy wasn’t able to show off his wheels as much. That has not been the case in the IFL, though. Barker ranks fourth in the entire league in rushing with 750 yards and 16 touchdowns on the ground.

“I would say my senior year at Troy I wasn’t necessarily healthy coming off an ACL (tear) and I also had a hamstring graph, so I was probably 75-80 percent my senior year,” Barker recalled. “So, I didn’t run as much my senior year. I enjoy running and I think it adds pressure to the defense when a quarterback can do both things.

“The indoor game is a little tricky because the field is a lot smaller. So you have to be more decisive and be smart and take care of yourself and get down. I try to adapt my play style to be able to take better care of my body.”

In his first year in the IFL, Barker has guided the Wranglers to the IFL Championship, just one year after the team was one of the worst teams in the league. This season is also just the second season ever in the Wranglers history. The success Barker has enjoyed in the IFL could lead to more opportunities back in the outdoor game, whether that be with the USFL, XFL or NFL.

“We’re kind of at a place where we’re trying to further my career and take it as far as I can,” Barker said. “Whatever opportunities present themselves we’ll talk through it. This has been about getting more film of me playing healthy and proving I can still play at a high level. I would be open to any and all opportunities moving forward.”

Before opportunities in other leagues come up, though, Barker and the Wranglers will battle the Quad City Steamwheelers in the IFC Championship Game on Saturday night.

“We really struggle coming out in the first drive, whether we get the ball first or defer to the second half, so I think starting fast offensively is something we’re focusing on,” Barker said. “If you start fast you can carry that momentum over to the rest of the game. We also want to match (Quad City’s) intensity, that’s a key for us, and having no turnovers. We need to take care of the football and execute the game plan that we have.”

The Wranglers and Steamwheelers will kick off at 5 p.m. on Aug. 13 with the game streaming live at https://tinyurl.com/mr2wdv4k.