The Troy Trojans defense is one of the most accomplished and talented defenses in the Sun Belt Conference and a big part of the veteran group’s success can be attributed to sophomore Javon Solomon and junior Richard Jibunor.

Solomon and Jibunor combined to total 27 tackles-for-loss and 19 sacks in 2021 but the unique thing about that is the pair did it primarily sharing snaps. Jibunor and Solomon both play the “bandit” position in Troy’s defense, which is hybrid of a defensive end and outside linebacker who must be able to drop back into coverage on certain downs and put his hand in the dirt and play on the line of scrimmage at other times.

Solomon grew up in Tallahassee, Fla. and was a star player for Godby High School, while Jibunor grew up in Nigeria before moving to Georgia. The 6-foot-3-inch, 233-pound pass rusher originally started his college career at Auburn before transferring to Troy in 2019. 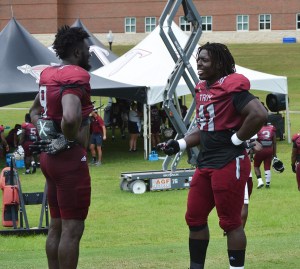 Jibunor and Solomon are tight on the field and off. (Photo by Josh Boutwell)

With players as talented as Jibunor and Solomon sharing snaps, it could lead to discontent in some locker rooms, but that hasn’t been the case for them.

“That’s my brother, we work through it and talk it about all the time,” Solomon said of sharing snaps with Jibubor. “Hopefully we’ll get more time where we’re in there together (this year) but it’s always a pleasure to share snaps with my brother. It’s a dog-eat-dog world but have each other’s back.”

Jibunor and Solomon have been sharing more time on the field at the same time during preseason fall camp, which could provide for some added issues for opposing quarterbacks.

“That’s one thing coming in that (the coaches) really wanted to input into the defense,” said Solomon. “We’re just two dogs, so you definitely want us to be out there together. Regardless, we try to capitalize anytime we’re on the field and we’ll take our chances and run with it, whether it’s together on the field or sharing snaps.” 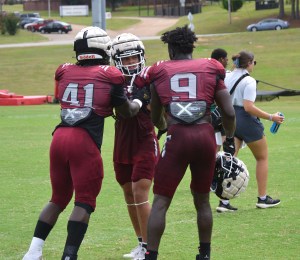 Solomon and Jibunor work with a young teammate during practice. (Photo by Josh Boutwell)

Jibunor is also excited about the potential chance to rush a quarterback with his “brother from another mother.”

Jibunor emphasized that the success he and Solomon are able to have as pass rushers is owed partly to the success of Troy’s defensive tackles.

“The main thing that really helps us is that we have really good interior linemen,” Jibunor said. “Guys like (Will) Choloh, (Luis) Medina and Buddha (Jones). Those guys have a big role and they do a really good job in the middle. That gives us opportunities to get our man-one-one- and be free and just work on our man. If those guys weren’t as good as they are we wouldn’t be able to do anything coming off the edge.”