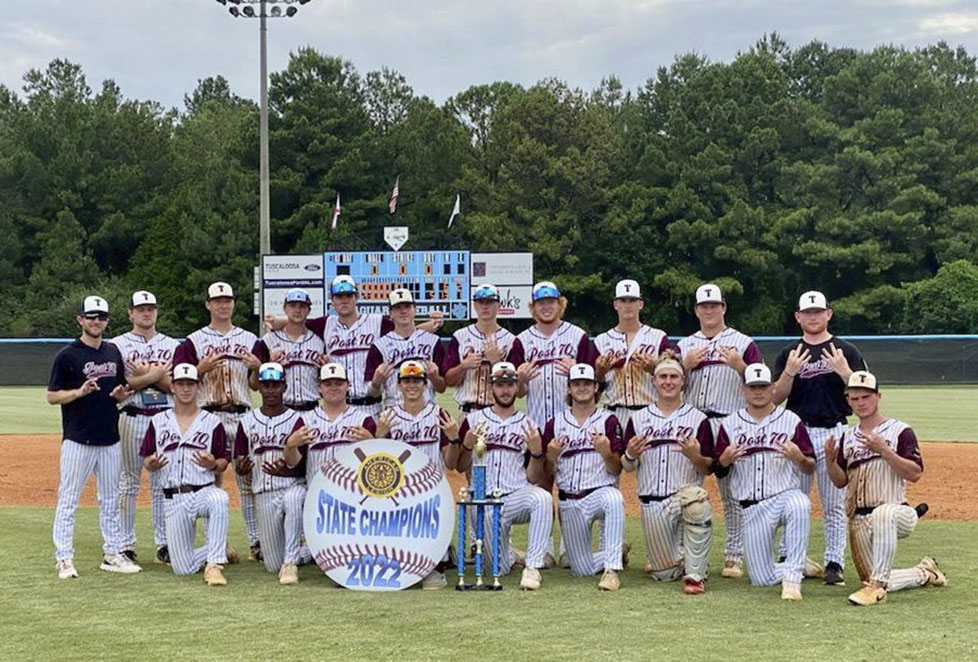 This marks Troy Post 70’s sixth state championship and will now advance the 19U squad to the American Legion Mid-South Regionals in Pelham in August. Post 70 started off the state tournament on July 22 with a 9-1 win over Shelby County Post 555 at Northridge High School in Tuscaloosa.

New Brockton ace, and Enterprise State signee, Drew Cashin was the winning pitcher with eight strikeouts and just two hits and one earned run allowed in seven innings on the mound. Troy University signee Brooks Bryan, a Carroll High School graduate, went 2-for-4 at the plate with a home run, one RBI and two runs, while Auburn High School’s Todd Clay went 2-for-4 with a run. ESCC signee and Enterprise native Will Powell also hit a homer in the win. Enterprise’s Drew Shiver – who is also committed to Troy – went 2-for-4 at the plate with a run.

On July 23, Post 70 captured a 5-3 win over Tuscaloosa Post 34 with Shiver leading the way at the plate, going 2-for-3 with two RBIs and a run. Clay also went 2-for-4 with a run. Wetumpka pitcher Douglas Johnson got the win on the mound as he struck out four batters and gave up five hits and just one earned run in five and 1/3 innings on the mound. Pike Lib’s Press Jefcoat – who is committed to Pensacola State – pitched one and 2/3 innings and gave up no hits or runs, while striking out two batters, as well.

Post 70 advanced to the State Championship on July 24 and Tuscaloosa Post 34 also managed to find its way back into the championship game. The rematch, however, was more of the same as Post 70 dominated their way to a 5-1 win to earn the state title.

Southern Union Community College pitcher Trey Cavanaugh – an Enterprise native – earned the start on the mound and pitched five innings, giving up two hits and no runs with four strikeouts. Fellow Southern Union pitcher Walker Stallworth – a Pike Lib graduate – pitched one inning and fanned a batter, while giving up three hits and one earned run. Also, in one inning on the mound Houston Academy’s Tucker Jackson retired three batters, while giving up a hit and no runs.

Bryan showed off the ability he’ll be bring to the Trojans next season as he went 3-for-4 at the plate with an RBI, while Opp’s Ethan Cox went a perfect 3-for-3 at the plate with a double. Pike Lib’s Darryl Lee scored two runs on the day and earned an RBI, as well.

The 19U team continues play Aug. 3-7 at the American Legion Mid-South Regional Baseball Tournament in Pelham against other teams from Alabama, Mississippi and Louisiana.