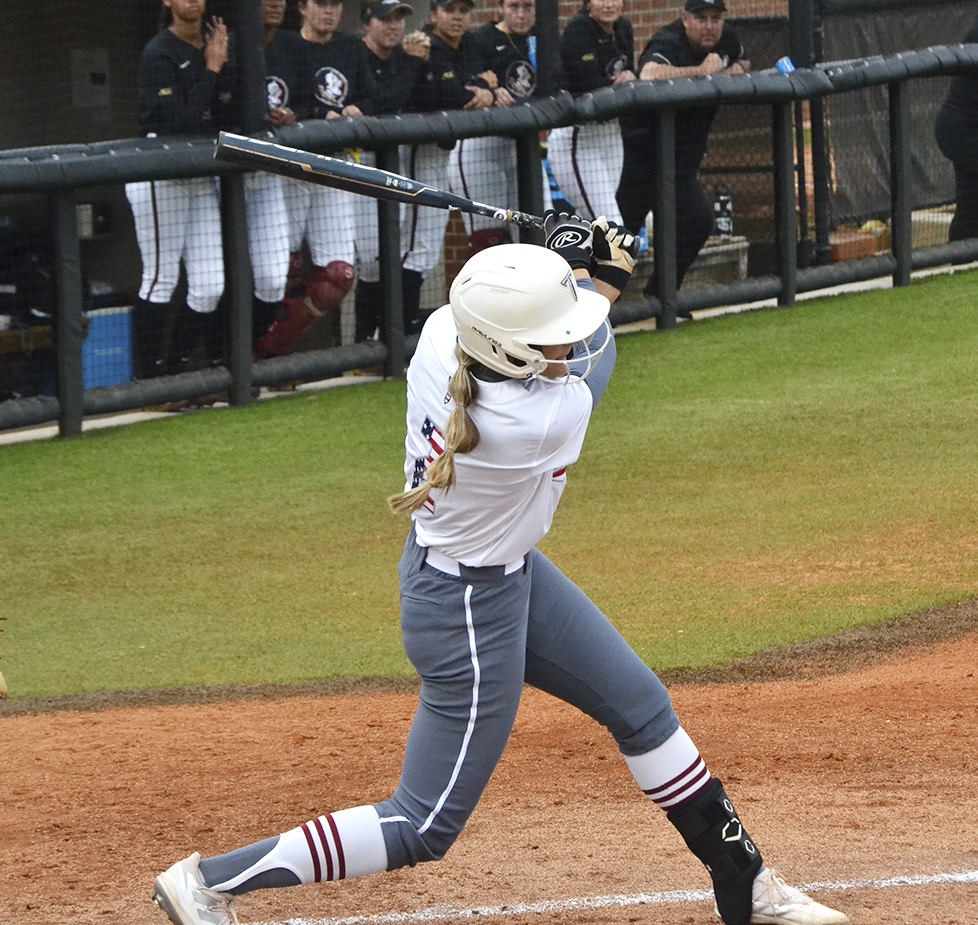 Anslee Finch (2) and the Trojans split their first two games in the SBC Tournament this week. (Photo by Josh Boutwell)

The Troy Trojans (30-20) split a pair of games to open up the Sun Belt Conference Softball Tournament in Mobile on Wednesday and Thursday.

Troy rallied to pick up a 2-1 win over the UT Arlington Mavericks (22-26) in the second round of the SBC Tournament on Wednesday, after receiving a bye from the first round of the double elimination tournament.

In a defensive battle, UTA took a 1-0 lead in the fifth inning before Troy answered right back in the bottom of the inning. Kennedi Gaton drove Anslee Finch home to tie the score. Logan Calhoun followed up with a fly ball into center field to drive Audra Thompson home for what ended up being the game-winning run.

Calhoun and Horne were the only Trojans to earn hits on the day. Leanna Johnson struck out six batters, while giving up just four hits and one earned run in seven innings in the circle. Catcher Candela Figueroa had six putouts on defense and Gaton had three putouts and two assists.

“This was just a really good team win today,” Troy co-interim coach Taylor Smartt said. “Leanna fought through adversity in the circle and continued to give our team a chance, and we played a really solid defensive game. Kennedi came up with some clutch plays and the bottom of our lineup produced at crucial times. Logan’s hit was huge as it gave us the go-ahead run we needed.”

Troy followed up with one of the team’s most frustrating outings of the season in a 9-1 loss to No. 1 seed Louisiana on Thursday morning. Troy actually took a 1-0 lead in the second inning when Gaton drove Dothan’s Blake Gibson home with an RBI single. Things completely fell apart in the bottom of the second inning, however.

Troy’s ace pitcher Johnson was called for an eye-popping 20 illegal pitches in the first two innings as both she and the coaching staff seemed perplexed and frustrated by the calls. As a result, Louisiana scored four runs in the inning and never looked back.

Jade Sinness, Taylor McKinney, Gibson and Gaton each earned one hit on the day. In total, four Troy pitchers took the circle with McKinney replacing Johnson for the remainder of the second inning and both Libby Baker and Haley Postell pitching one inning each.

On Friday, Troy will attempt to remain alive in the SBC Tournament as the Trojans play the winner of a game between Coastal Carolina and Appalachian State in an elimination game.