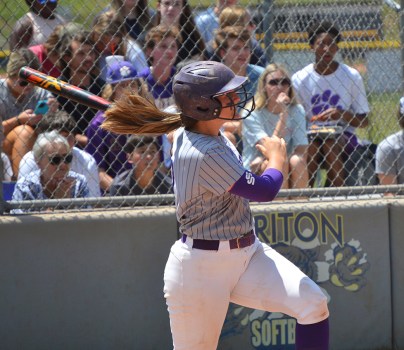 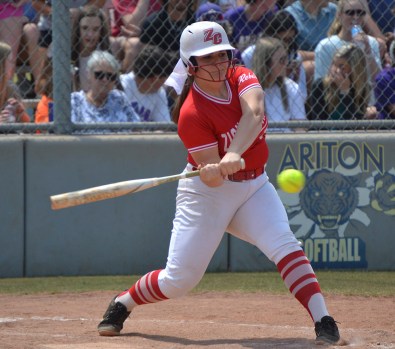 Zoie Flowers (11) gets a hit against Ariton. (Photo by Josh Boutwell)

With both schools facing elimination in the Class 2A, Area 4 Softball Tournament on Thursday, the Ariton Lady Purple Cats bested the Zion Chapel Lady Rebels by a score of 11-1.

For Zion Chapel, Emily Rhodes went 3-for-4 at the plate and Kaylee Hodge went 2-for-4 with an RBI. While Zion Chapel managed to earn 11 hits in 28 at bats, the Lady Rebels couldn’t get into scoring position.

For Ariton, Sydney Adams pitched all seven innings and retired four batters, while giving up 11 hits and one earned run.

The win for Ariton pushes the Lady Purple Cats into the Area 4 Championship, while Zion Chapel is eliminated from postseason play. Ariton will need to defeat GW Long in back-to-back games in the Area Championship to win the title. Ariton and Long will both advance to the regional round of the Class 2A State Playoffs regardless, however.