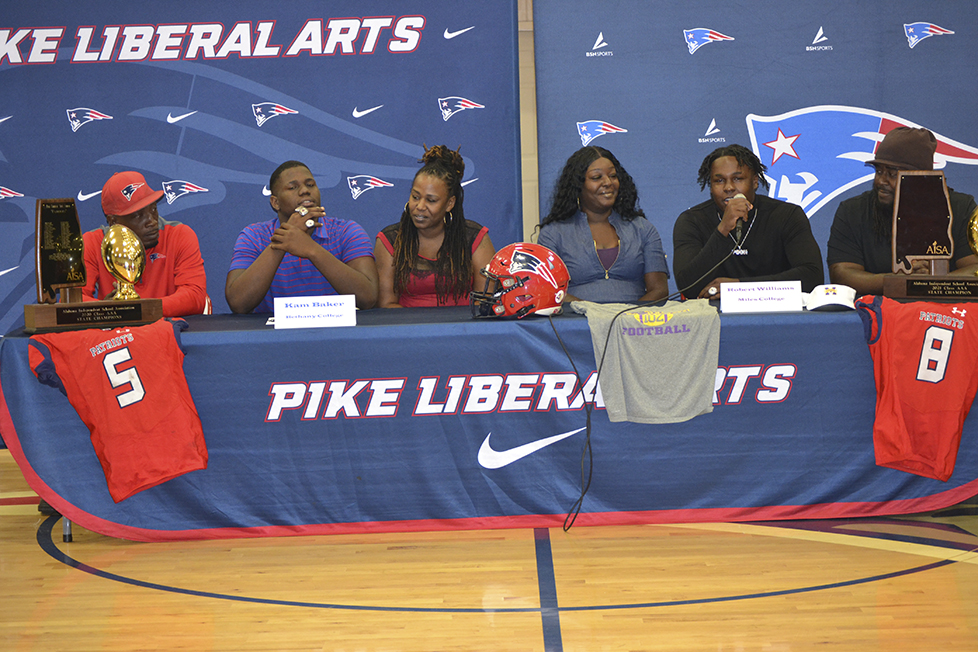 Pike Liberal Arts seniors Kam Baker and Robert Williams lined up next to each other in the Patriot defense, so it’s only fitting that the two signed their college scholarships next to one another, as well.

On Monday, Baker signed with Bethany College in Kansas and Williams signed with Miles College in Montgomery. Pike football coach and athletic director Rush Hixon spoke of their ability on the field but also their character, as well.

“Both guys have been a part of a state championship here and it’s very fitting that they sign on the same day because they led our team as the top two tacklers,” Hixon said. “I can’t say enough about the character of the two sitting up here today.

“We talk about this all time but it’s true, they’ll play football for a long time but once they’re done playing, they’re going to be successful in life, too. That’s the type of people they are and the type of guys they were raised to be.” 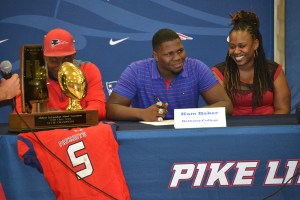 Baker led Pike in tackles as a senior totaling 137 tackles, 14 tackles-for-loss, five sacks and five interceptions. The only thing more eye-popping than his defensive numbers was his totals on the offensive side. In just 51 rushing attempts, Baker rushed for 773 yards and 13 touchdowns, which comes out to more than 15 yards per carry and an average of one touchdown every four carries. Baker was also an AISA All-Star and ASWA second-team All-State as a senior.

“Kam brought it every day,” Hixon said. “His coaches and teammates never had to worry about whether he would bring it every single day. He is an extremely special athlete and a really special person.”

Baker said the coaches at Bethany made him feel at home and while he will be starting out as a linebacker, he’s open to playing wherever his coaches need him.

“The coaches really wanted me and they showed me a lot of interest,” he said. “So, I wanted to go out there and do my thing. If (the coaches) want me to (play offense) I’ll do whatever they need me to do to win.” 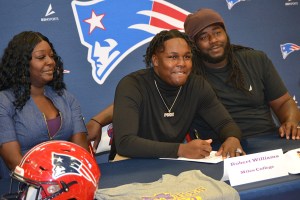 Williams earned 122 tackles, 12 tackles-for-loss, nine sacks, one interception, two fumble recoveries and six pass breakups as a senior. Williams, though, started his career at Pike at a very different position.

“Robert came here as a quarterback but it only took him a very little amount of time to see that he was a really exceptional linebacker,” Hixon said. “Once he made that transition he never looked back.

Williams said that playing college football has been a dream for him.

“It felt like a dream come true,” Williams said of signing his scholarship to play at Miles. “I always saw myself playing at the college level. I just have to thank God and thank my family.”

Miles College’s linebackers coach Ronald McKinnon is a Wiregrass legend having been a star at Elba High School before becoming the top player in all of Division II football and then playing and starting in the NFL for more than a decade. McKinnon not only recruited Williams to play at Miles but will be his position coach, as well.

“He was definitely an impact on my decision,” Williams said of McKinnon. “I watched him a lot and we built a good relationship and I can’t wait to be coached by him, too.”

Playing at Pike has been an experience that Baker said he wouldn’t forget.

“It means a lot,” he said of playing for the Patriots. “It gave me my first championship, I had never seen anything like that, and it gave me a great family, too.”

Williams agreed with his teammate on playing for the Patriots.

“It was definitely a different experience,” Williams said. “I got to see things differently here. The coaches and players taught me a lot of things here.”