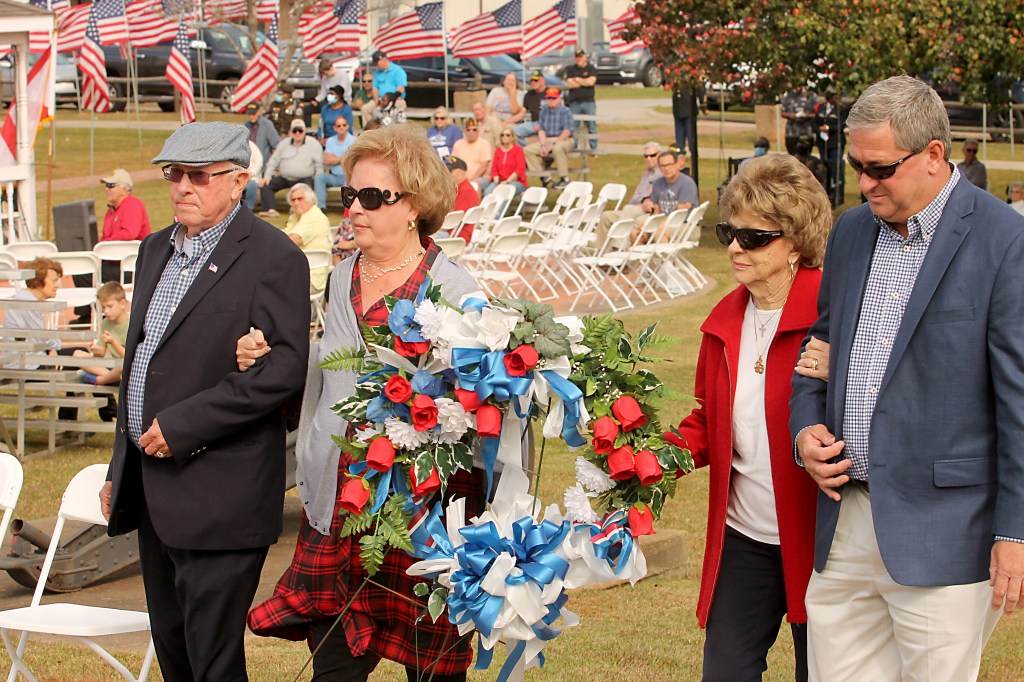 (From left) Peavey Trotter, Jewel Flynn, Josephine Meeks and Greg Meeks place a wreath on the Wall of Honor. The names of Charles Meeks and Col. William E. Flynn were added to the Wall.

The American Legion Post 70 and Post 70 Auxiliary honored those who served in the U.S. military on Veterans Day.

The Auxiliary held a special ceremony at 10:30 a.m. to add two new names to Bicentennial Park’s Wall of Honor. The Wall contains the names of the deceased men and women from Pike County who served in the military.

Elaine McLeod, Auxiliary president, spoke briefly before the families of the deceased veterans placed their loved one’s names on the wall.

“For more than 30 years, we’re been putting names on the Wall of Honor,” McLeod said. “There are 437 names on the wall, and today we will add two more.”

After the names were added to the wall, Post 70 conducted its annual Veterans Day service.

“We gather here twice a year,” Post 70 Commander Bob McLendon said. “On Memorial Day, we honor those who were killed in action for combat wounds or later died from combat wounds. Today, we gather to celebrate all veterans. We salute them and honor them all.”

Bob Cooper, a helicopter assault pilot during the Vietnam War was the featured speaker. Cooper spoke briefly on this history of Veterans Day before discussing the difference between patriotism and nationalism.

Cooper also said it was essential to understand there was a difference between patriotism and nationalism.

“Patriotism is a word that has roots dating back to the 1500s,” Cooper said. “It was first used in the 1700s when someone added ‘ism’ to patriot. Nationalism was first used about 150 years later. Originally, the words were used interchangeably. The meaning of patriotism has never changed, but the meaning of nationalism has drifted away from patriotism.”

Cooper said patriotism meant a love of, support for and a willingness to defend one’s country. He said nationalism had changed and became associate with political movements that can result in ideas of superiority, exclusion and isolation. Cooper said in a nationalized version of patriotism, people who have the same ideas or ethnicity can identify themselves as patriots and those who are not likeminded or of the same ethnicity are traitors.

He closed out by noting that Pat Tillman was a true patriot. Tillman was a professional football player for the Arizona Cardinals from 1998-2001. In May 2002, he joined the United States Army after the 9/11 terrorist attack. Tillman was killed by friendly fire in Afghanistan April 22, 2004.

“Not many people would turn down a $3.6 million contract in the NFL to serve their country,” Cooper said.