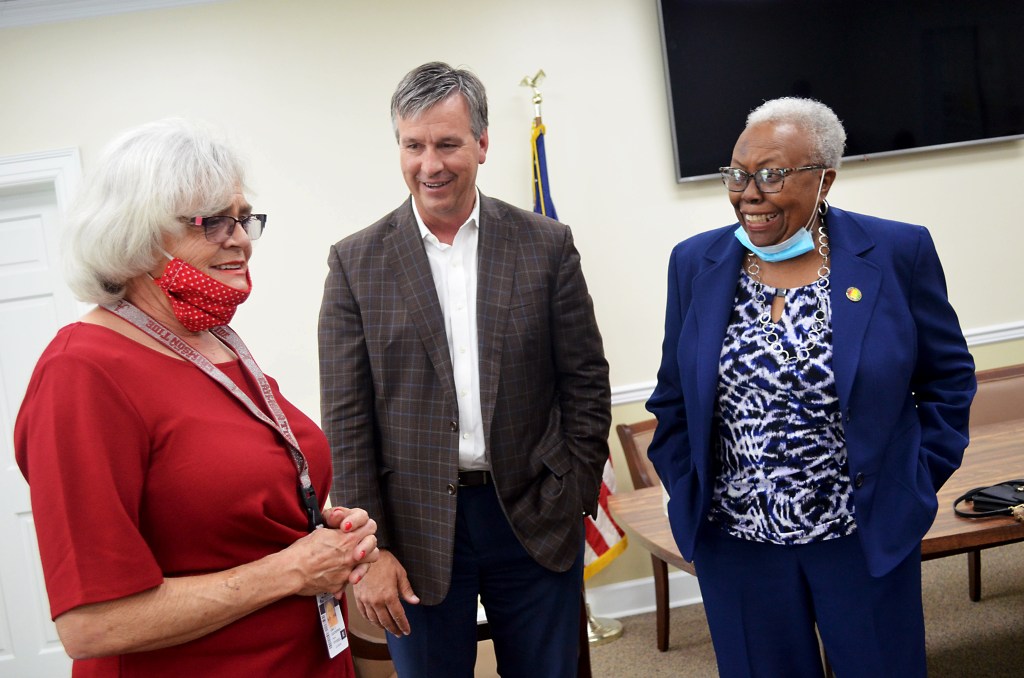 Barry Moore, U.S.  Representative for Alabama’s 2nd congressional district, made a stop in Brundidge at noon Thursday and had lunch with city officials and invited guests.

Moore was welcomed by Brundidge Mayor Isabell Boyd, who presented him with a key to the city, and thanked him for taking time to stop in Brundidge.

Moore responded, saying that God has blessed him with a servant’s heart and he is thankful for the opportunity to serve.

Moore told the gathering of city and community officials that he is their vote in Washington, D.C.,  and will always be willing to listen to their suggestions and concerns.

“I am here to serve you,” Moore said. “Mine is a grassroots effort and I want to be available to you and take your questions. And, I want to make sure that you get the help from Washington that you need.”

Moore said he has a strong and dedicated team that is ready and willing to serve his district. His team includes Brundidge native Eliana Strother, who works in the Dothan office.

“We have such good people here in Pike County and so many opportunities available, “Moore said. “This area is moving forward and in so many outstanding ways. We are here to serve you as well as those up the ladder if we are not available.”

Moore spoke of the discord in today’s America and his dedication to “heal our nation, to move forward, to mend fences.”

He expressed confidence that there are great people working toward healing and uniting America.

“I am a great believer in prayer,” Moore said. “Prayer can and will unite us.”

Moore took questions from the floor that included concern for the welfare of American’s veterans, for children of all school ages who have lost in-school time due to the coronavirus and concern about hospitals all across the country that are struggling financially and facing closure.

Moore said he shares the concerns of his district and others across the country during these unprecedented times and he will work diligently to bring about the best resolutions possible.

He encouraged those present to contact him and/or his office with questions and concerns with assurance they will be addressed.

Brundidge City Manager Willie Wright, expressed appreciation to Moore for his willingness to make himself available to his constituents and for his dedication to the people of Alabama’s 2nd Congressional District.’