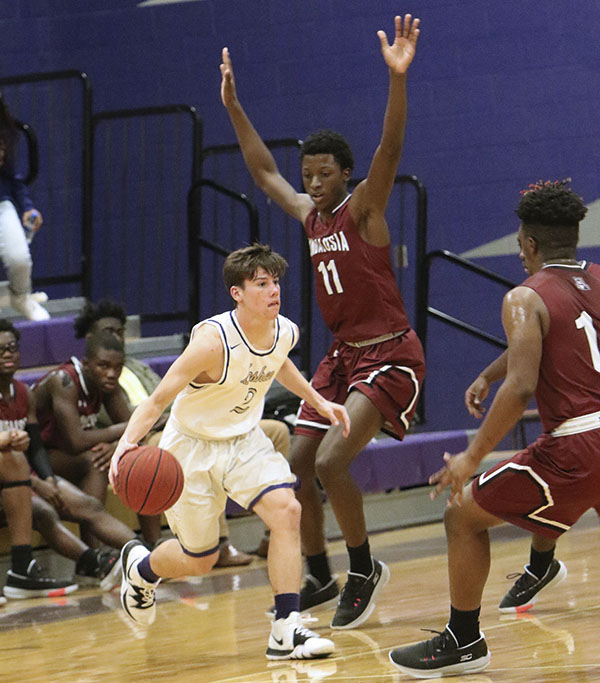 Eagles begin the season against Luverne

The Goshen Eagles basketball team is ready to hit the court for the 2020-2021 season. The Eagles, under first year head coach Darius Davis, will open up against the Luverne Tigers Friday in Luverne.

It’s been a long offseason for the Eagle basketball team  after they fell in the postseason in the spring. This season will be a year of first for the Eagles. Not only are they welcoming in a new head coach, they will also be competing in Class 3A for the first time.

“Everybody is excited,” Davis said. “We are ready to start playing. It’s been a while since we have had a chance to play.”

The Eagles are starting their season a little later than some teams. They have spent the last couple of weeks preparing for what they hope is an exciting and successful season.

“We have been going through everything,” Davis said. “Going through all of our plays and doing some conditioning. Trying to get prepared for the season. We  have been practicing as much as we can and working hard.”

While preparing for the season, Davis has been educating his players on how to stay safe in the midst of COVID-19.

“I have been getting the guys prepared and letting them know about the situation and how to stay safe,” Davis said. “A lot of the guys played football so they are used to the protocols.”

“The guys are getting along pretty well and we have a good chemistry going,” Davis said. “A lot of the guys moved up from the JV and have been playing together for a few years. We have four seniors playing this years, so they have some good basketball in them.”

Davis will rely on both Warrick and Snyder to be the leaders on the team this season.

“I expect leadership out of those guys,” Davis said. “I expect those guys to take control of the team and make everyone else feel comfortable. They don’t seem nervous or flinch about anything, so I feel like they are going to lead us to a good season.”

The Eagles will play in Area 4 this season along with Opp, New Brockton and the Class 3A defending state champion Pike County Bulldogs.

“They are always a good team,” Davis said. “They are physical and they will play you hard. They always have guys that can run up and down the floor. They are a tough team.”

Although they are not in the same classification this season, Davis sees Luverne as a rival and he hopes his team can get the season started with a big win.

“I see Luverne as a rivalry game,” Davis said. “ A lot of the guys know people from there and they have been playing them for years. They are hyped up about it and they are excited to play because it’s been so long. We are ready to get out there.”

Alabama Sen. Jimmy Holley, R-Elba, was at the Pioneer Museum of Alabama Thursday to present a $15,000 check in support... read more