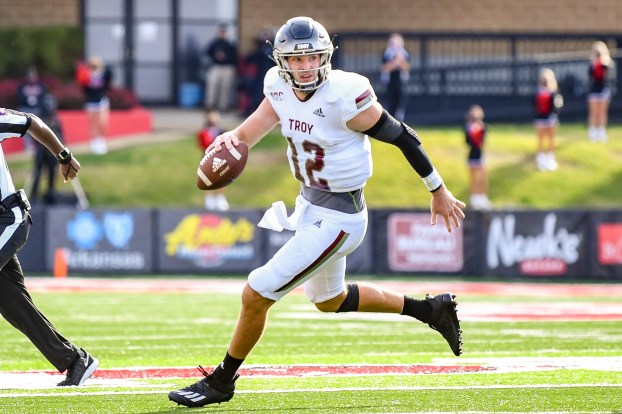 A week after posting nearly 500 yards against Arkansas State, the Troy offense was shut down in their loss to Georgia Southern on Saturday afternoon.

The Trojan offense mustered six points on a pair of field goals by Evan Legassey, but they were held out of the end zone in a 20-13 loss to the Eagles.

“I was very disappointed that we didn’t get the win,” head coach Chip Lindsey said. “Offensively, I think we played probably about bad as we could have. With that being said, we did have a chance to win the game at the end. We never got into a rhythm and put ourselves in poor positions on first down which made for a lot of long second and third downs. Overall, it was a missed opportunity for us on the road. We need to coach better and play better. It’s my responsibility for us to play better offensively.”

In his second career start, quarterback Jacob Free threw two interceptions in the loss including one during the Trojans’ final drive, halting a comeback effort.

“As the quarterback, you got a lot of the credit when things go well and a lot of the blame when things don’t,” Lindsey said. “It was a combination of things. Jacob [Free] didn’t play his best game and he knows that, but we have to play better around him.”

Free is playing in relief of starting quarterback Gunnar Watson, who left the game against Georgia State due to injury. On Tuesday Lindsey announced that he doesn’t know how close Gunnar is to returning and that he is not going to rush him back.

“I wish I knew how close he was to coming back. We’re hopeful, but we were hopeful last week too. I don’t want to play him until I’m convinced that he can protect himself and he’s comfortable. Gunnar would have played two weeks ago if we would have let him. Now he’s going to need to prove to us on the field that he’s ready.”

Lindsey said all the backup quarterbacks will get reps this week during practice and will decide who will play quarterback on Saturday.

“Anytime you don’t have the performance that you want, you evaluate everything. We’re going to get several guys reps this week. Again, we’re hopeful that Gunnar will be back this week, but we need to be ready in case he doesn’t. Last week we were in a similar situation. All of our quarterbacks will get reps this week in practice and then we’ll decide on which quarterback is our best option this week. That will be based on practice performance which is how Jacob won the backup quarterback spot in the first place.”

The Trojan offense will take on a Coastal Carolina defense that is holding opponents to a league- best 16.3 points per game. They are limiting offenses to 174 passing yards per game.

Patriots heading to their first semifinal since 2010