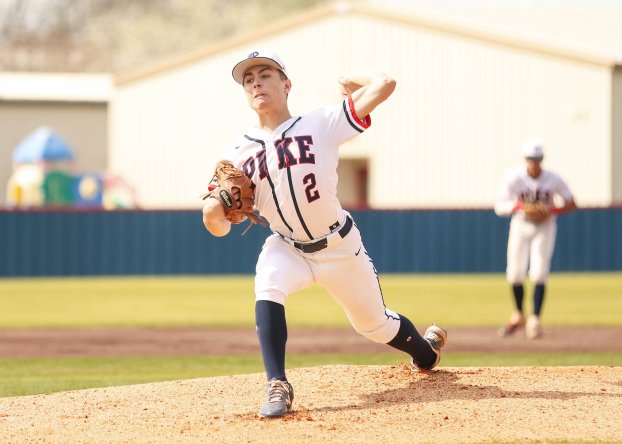 By candace nelson | submitted article Pike Liberal Arts rising junior Drew Nelson delivers a pitch for the Patriots against Macon-East during the 2020 season.

Pike Liberal Arts rising junior Drew Nelson took an early step to accomplishing a dream when he committed to play baseball at Auburn University on Friday.

“Really excited and pumped,” Nelson said. “I got the opportunity to play with their assistant coach Tim Hudson last summer. I kept up with their recruiting coordinator and finally made it happen this week.”

Nelson has been a long-time fan of Auburn. When Auburn offered Nelson a spot, it was an easy decision to make.

“I have lived in Troy all my life and I have been really close to Auburn,” Nelson said. “They have had so many good pitchers come through. They had a first pick a few years ago and they had some first rounders. They’re definitely on the rise as a top program in the nation. I fell in love with the coaches; they really made me feel like home.”

Nelson will have the opportunity to work under former Auburn and major league pitcher Tim Hudson, who is the pitching coach with the Tigers.

“I’ll be able to learn from one of the best,” Nelson said. “He’ll be able to critique me and help me grow into a better pitcher. It will help a lot.”

Nelson still has two more years left at Pike Liberal Arts. With no baseball being played this spring, Nelson believed this was as good of a time as any to make his decision.

“There were other offers on the table, but Auburn was my dream school,” Nelson said. “I have loved the campus and the town of Auburn. It was an easy choice for me.”

Nelson believes playing at a school like Auburn will be a good stepping stone that will help him accomplish more goals in the future.

“This is no time to stop and think this is the end goal,” Nelson said. “This was one of my goals. I wanted to play Division I, SEC baseball. If I’m fortunate enough to make it professional, then that will be the plan.”