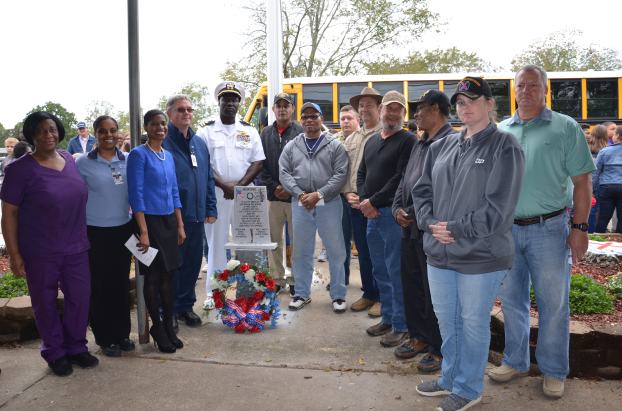 The program honored all veterans and specifically the veterans from the Banks area.

Jones told the students that character is the trait that matters most when making one’s way in the world.

She challenged the students to “work on your character.”

“You must avoid negative influences in your lives,” she said. “Develop a spirit of obedience. In today’s world, we have lost the capacity to obey. But, rules are designed for your safety, so obey and appreciate rules. They are there for a reason.”

Jones’ third directive for the students was “look out for each other.”

“Find a way to help each other,” she said. “Have integrity and make life better for yourself and others.”

Shantell Rouse, principal Banks School, expressed appreciation to all who made the event special for the students, the veterans and the Town of Banks. She invited the veterans to a reception in their honor at the Town Hall.

William “Billy” Jackson, Col. Ret. quickly got the attention of those in attendance at the 20th Annual Veterans Day Breakfast... read more