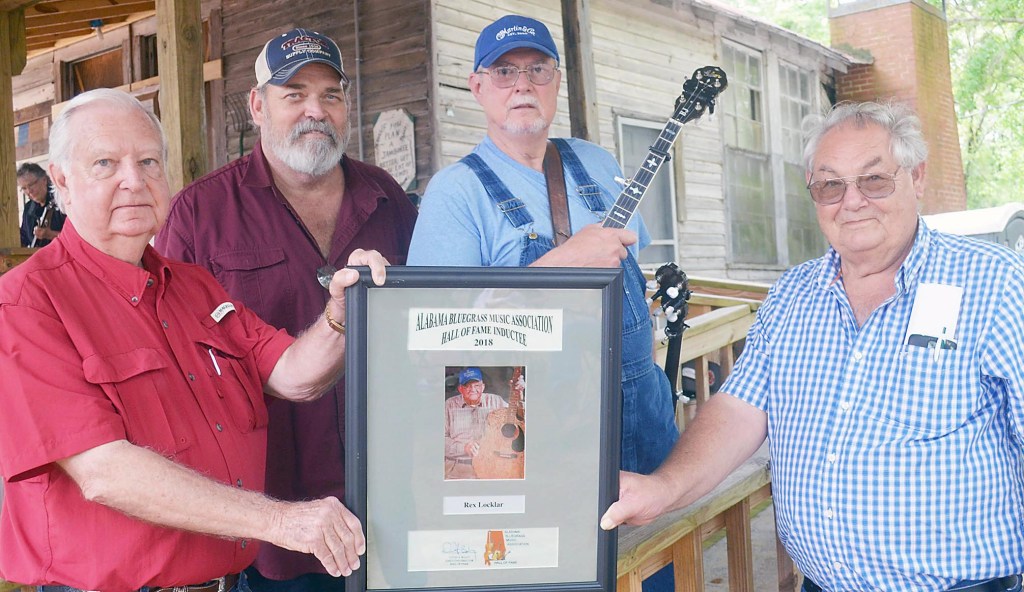 Locklar’s family members and many friends traveled to the “Magic City” for the induction but Ol’ Rex, as he was affectionately known, had more friends than, as Pete Austin said, “you could shake a stick at.”

“Everybody loved Ol’ Rex,” Austin said. “Those that didn’t get to go to the induction were disappointed. Rex had been hosting bluegrass jamborees at Henderson for 48 years. So, not everybody that wanted to be there could get there.”

On Saturday afternoon at the Henderson Bluegrass Festival, attending friends of Rex Locklar had the opportunity to be a part of his induction into the Alabama Bluegrass Music Hall of Fame.

“The annual memorial service was something Rex started many years ago to honor the members of our bluegrass family that had died since the last festival,” Austin said. “We wanted, not only to call Rex’s name, but also to acknowledge his induction into the bluegrass hall of fame.”

Locklar’s brother, Wiley Locklar, accepted the plaque on behalf the Locklar family and expressed appreciation for the longtime and dedicated support of “Ol’ Rex” and his bluegrass festivals.

“Rex was a member of the Goshen High School Class of 1944,” Locklar said. “He served in the Army from January 1945 until 1947. He was at Pearl Harbor after the bombing and it was there that he put together a little ol’ band. Rex was a good musician and he could sing.”

When Locklar came home from the Army, he worked on the farm and at the family store. When the Henderson school was closed, the property reverted back to the Locklar family. Wiley Locklar said Rex began having square dances at the old schoolhouse. But soon, bluegrass music took center stage. When Locklar died in February 2014, his friends were determined that bluegrass music in rural Henderson would not die.