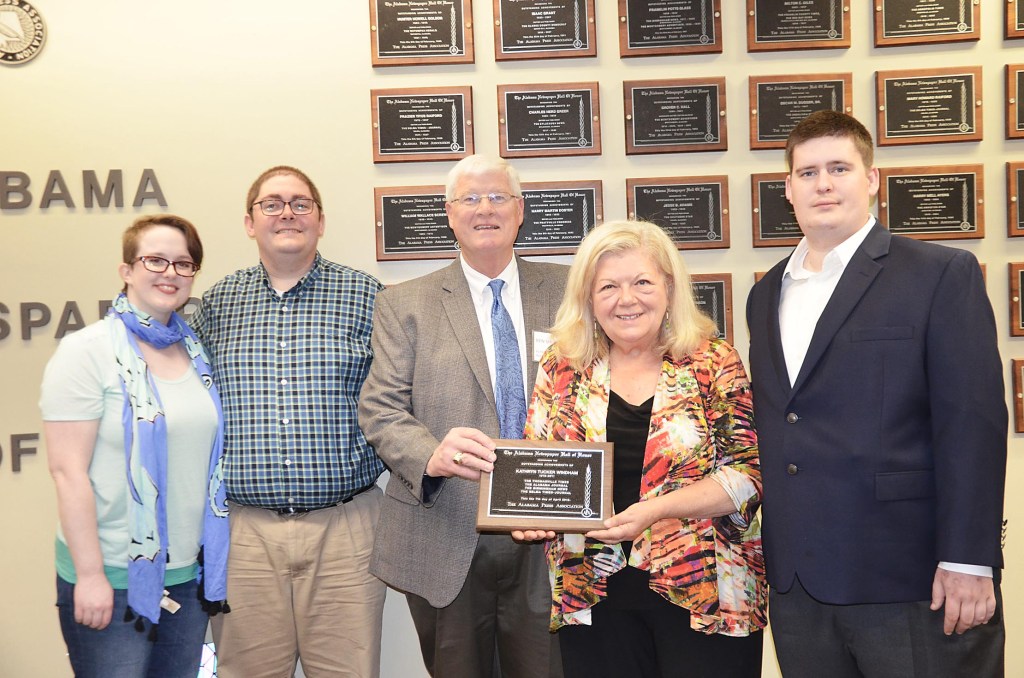 Messenger photo/Jaine Treadwell Kathryn Tucker Windham, award-winning journalist and photographer, was inducted into to The Alabama Newspaper Hall of Honor on Saturday. Windham’s daughter, Dilcy Hilley, accepted the award. Pictured with Hilley are Windham’s grandsons, Ben Windham, right, and David Windham and his wife, Alex. Windham gained popularity throughout Alabama as an author and storyteller and as a featured teller at the Pike Piddlers Storytelling in Pike County.

On Saturday, two giants of the newspaper industry were inducted into the Alabama Newspaper Hall of Honor at the Ralph Brown Draughon Library at Auburn University. Kathryn Tucker Windham and Paul Davis were inducted as the 119th and 120th members of the prestigious Hall of Honor.

Windham, who died in 2011 at the age of 93, had a long and storied career in the newspaper industry as a reporter, editor and photographer with The Thomasville Times, The Alabama Journal, The Birmingham News and The Selma Times-Journal. However, it is, perhaps, as the beloved and renowned storyteller, that she is most widely remembered.

So it was as it should be when Windham was inducted. She went into the Hall of Honor with stories remembered.

Ben Shurett, chairman Hall of Honor Committee, said, even when Windham was a young girl, she wanted to be a newspaper reporter. As a young woman, she was rejected by an editor because she was a woman.

“It had never once occurred to me that the paper I wanted to work for would not want me. Certainly, I never expected to be rejected solely because I was a girl,” Windham wrote in “Odd Egg Reporter.”

“Then, war change the world,” Shurett said. “Kathryn Tucker Windham was one of the first women to cover the police beat for a major daily newspaper in the South. She said she couldn’t believe that she actually got paid to ask questions that were none of her business.”

Windham worked for $15 a week at a job that took “as long as it took.”

Throughout the 1940s, Windham worked for The Birmingham News as a reporter, editor and photographer.

Windham married and had three children. She wrote freelance articles for a number of Alabama newspapers and penned a locally syndicated newspaper column. She joined The Selma Times Journal after her husband’s death in 1956 and won several Associated Press Awards for her writing and photography. She began publishing books and, around the late 1960s, she began telling stories. She founded the Tale-Telling Festival in Selma and traveled around the country telling stories that usually centered on her love for the South, its people and its lifestyles.

Windham’s daughter, Dilcy Hilley of Birmingham, accepted the honor for her mother with grateful appreciation to The Alabama Newspaper Hall of Honor. She read a short selection from Windham’s “Odd Egg Reporter” that illustrated the writing skills and both the wit and humor of Windham.

“As a newspaper reporter, Mother was not cut any slack with the freakish articles she was assigned to write,” Hilley said. “Articles about a four-foot okra pod and a dog that barked Dixie.”

Whatever was assigned to Kathryn Tucker Windham, she was up for the task. Even with a 1930s Brownie Camera, she could take an award-winning photograph. With an assignment about a peach that resembled Winston Churchill, Windham could churn out an article that had readers enthralled.”

Hilley said her mother would be humbled by the recognition by the newspaper industry.

“And she also would be proud,” she said. “This recognition of her means so much to our family. Mother loved everything about the newspaper business. She loved the sounds of the newsroom and of the press. But she said, all of that changed. It’s not the same. It’s quiet now.”