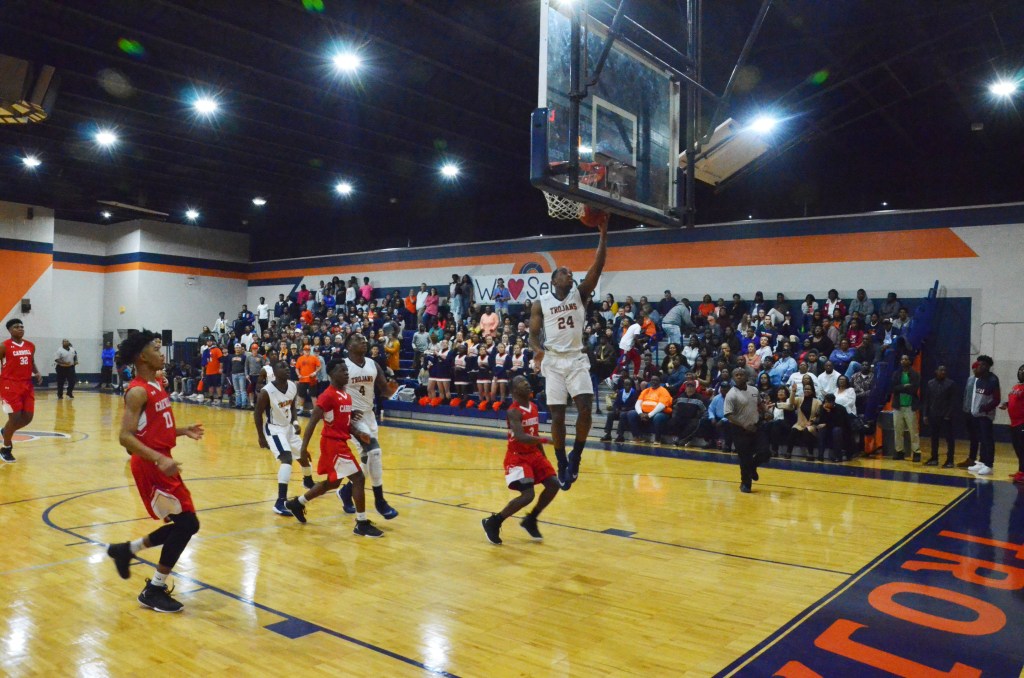 Jalen Tuck goes up for a layup against Carroll on Friday night in Troy.

The Charles Henderson Trojans put a stamp on the regular season with a 69-47 win over Carroll of Ozark Friday night in Troy.

The win closes out the regular season for the Trojans who will now set their sights to next week’s area tournament.

“The good thing about it is we had a chance to let everybody play,” said head coach Shelby Tuck. “We have a lot of seniors that don’t get a lot of playing time. It was a great opportunity to play all of them.”

Tuck noticed a sense of comfort coming from his offense on Friday. The Trojans scored over 15 points in three out of the four quarters.

“Over the last six or seven ball games we have been playing basketball the way you are supposed to play,” Tuck said. “We look forward to next week.”

The Eagles jumped to an early 5-4 lead, but from there the Trojans embarked on a 13-0 run to go up 17-5 and led throughout the rest of the game.

The Trojans took a 17-7 lead into the second quarter.

The Trojans went up by as many as 20 points in the second quarter. They scored 20 overall in the quarter and took a 37-20 into the half.

The Eagles attempted to come back early by scoring the first four out of the break and by quarter’s end, they had cut the Trojans lead down to 15 at 46-31.

Jalen Tuck led the way for the Trojans in the fourth quarter when he scored 9 points on three 3-pointers.

Tuck finished the game with 19 points off five 3-pointers.

“Jalen has been consistently shooting the ball for us all year,” Coach Tuck said. “The good thing about all these guys are that they are hungry.

Kelshun Campbell finished with seven points while Keontae Brantley had 11.

The Trojans will host the area tournament and will take on the winner of Greenville and Brew Tech on Thursday, February 8.