From player to coach, Snyder happy to be a part of Goshen family 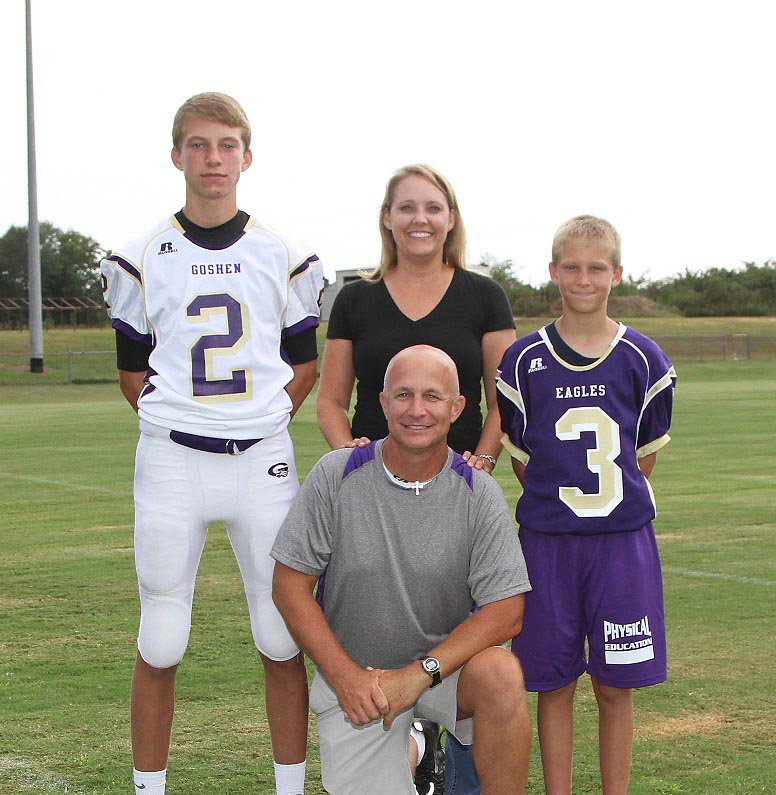 Coach Snyder has been running on the grass of Eagle Stadium since he was a child. After playing for the Eagles, Snyder became an assistant coach and 28 years later, Snyder is in his 11th year as head coach.

Every year has been special for Snyder, but none of them has measured up to the opportunity he has had to coach his son Brock over the last four years.

“It’s always an adventure when you coach anybody,” Snyder said. “You get to see a lot of kids grow up into young men and it’s kind of special when one of them is yours.”

Many coaches know the challenge of drawing a line between being a father and being acoach once on the field and the Snyders are no different.

Although it hasn’t been easy, Snyder believes he has held his own to toe the line between father and coach.

“He (Brock) would probably say I do a pretty good job with it,” Snyder said. “I am pretty hard on him with things. It’s difficult when you’re there both as a father and as a coach. There are expectations of both.”

There are plenty of benefits of coaching your son and they far outweigh the challenges that come with it.

“(I) get to have that experience of being out there with not only Brock but with Will, my younger one who is out there now,” Snyder said. “It’s very special; not too many people in life get to go to a job that you love and on top of that get to spend it with family.”

Coach Snyder has had the opportunity to watch his son turn into a pretty good football player as well as a leader.

“He has grown each year and he is a very smart young man,” Snyder said. “He is very goal-oriented. One of the things that impresses me the most is how much he cares about his teammates and how much they care about him.”

Snyder started running on the field of Eagles Stadium since he was seven years old. Since then, he has played for the Eagles, has been an assistant coach for the Eagles and is now the head coach.

“It’s special,” Snyder said. “I never was that great of an athlete. I just happened to be with people that were. I was able to coach with some great coaches and was able to learn from them and take a little bit of what they shared with me.”

Snyder learned the importance of family through the example of his parents. Snyder’s father is a long-time broadcaster of the Eagles football games.

“It’s a true blessing that you don’t choose your parents,” Snyder said. “Thank goodness that God chose mine for me. Dad has been announcing the games for as long as could remember. He has been an inspiration for me and my mother has always been there.”

It’s the family dynamic that is one of the many reason’s Snyder is so drawn to Goshen.

“It’s a family-oriented place and I am very blessed to have it,” Snyder said. “It not only carries on the field, but it’s in the community and in the families. It’s just a wonderful place and I have been very blessed that all my life I have been here and I wouldn’t trade it for anywhere else.