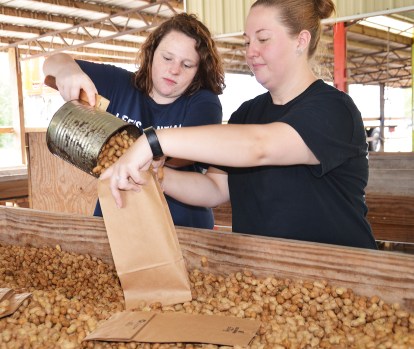 Brittany Lancaster and Stephanie Carmichael are among the many who volunteer at the World’s Largest Peanut Boil in Luverne. Volunteers bag the peanuts for selling and already, it looks like 26 tons will not meet the demand and more peanuts will have to be trucked from Florida. 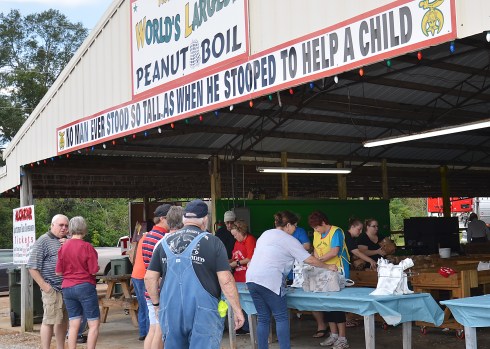 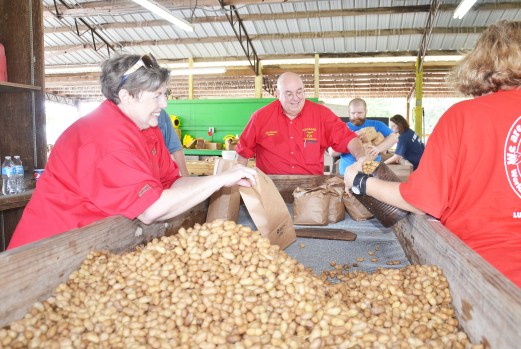 On Labor Day weekend each year, they all make their way to the World’s Largest Peanut Boil in the South’s Friendliest City: Luverne, Alabama.

William Baker may not be the “chief” of the sponsoring Crenshaw County Shrine Club, but he is among the first to arrive and the last to leave during the World’s Largest Peanut Boil. The boiling begins on Wednesday and continues until all the goobers are gone.

Baker was on hand mid-afternoon Thursday and was monitoring the goober-gitter traffic very closely.

“We’ve got 26 tons of peanuts, but it doesn’t look like that will be enough,” he said. “That will probably take us through Sunday morning, but we want to have peanuts through most of Labor Day. We’ll have to get more.”

The Shriners purchase the peanuts for the boil from Holland Farms in Jay, Florida each year because “you don’t find any better peanuts.”

“The peanuts for our boil are the descendants of the Dixie Runner, which is an old type of peanut,” Baker said. “It’s been around for 100 years or more. It’s the type of peanut that’s used to make peanut butter. It’s got more grease.”

Baker added with a smile that more grease give the peanuts “more flavor.”

The World’s Largest Peanut Boil has been a Labor Day tradition for 76 years and counting.

For most of those years, the Shriners boiled the peanuts in ol’ black washpots and stirred the nuts with boat paddles. Standing and stirring over a boiling pot was hot, bone-tiring work. So a few years back, the Crenshaw County Shriners decided to put aside the romance of the washpots and invest in five vats that would boil the peanuts in less time and without the Shriners having to paddle and sweat.

Although the vats have relieved the Shriners and their volunteers of some of the back-breaking chores, the peanuts still have to be removed from the vats and dumped into the wire-bottom trays for bagging and to be ready for sale.

“We depend on our Shriners and our volunteers to make the World’s Largest Peanut Boil a success,” Baker said. “We sell tons of peanuts every year to people from all around the area and to people on their way to and from the beach. We have a lot of people drive good long distances. They said there’s something different about peanuts from the World’s Largest Peanut Boil.”

“We put the peanuts in paper sacks and I mark the parched peanuts with a P,” Mothershed said. “This lady came up and said she wanted roasted peanuts and all we had was ‘parched.’ I jus took a marker and made the P into and R and she went away pleased.”

The Crenshaw County Shriners’ aim is to always please and the only dissatisfied customers are the ones who come after the peanuts are gone. The Shriners hope to have boiled and “roasted” peanuts on Labor Day– but don’t wait until it’s too late.