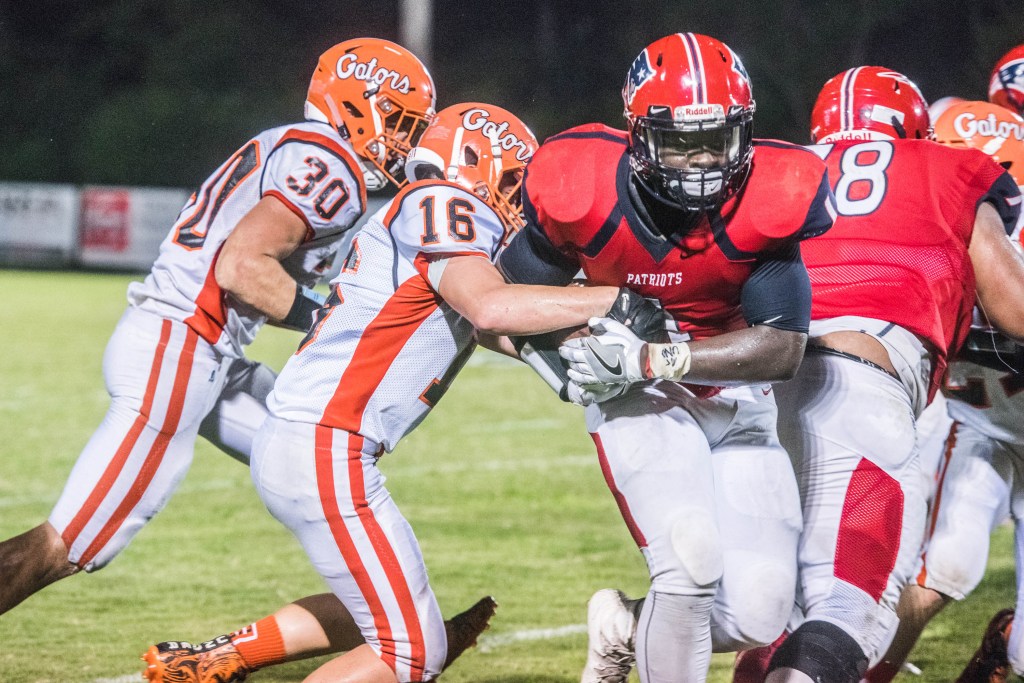 Messenger Photo/Jonah Enfinger The Pike Patriots started the season 2-0 after defeating both kingwood Christian and Clarke Prep. This Friday night they hit the road to take on Abbeville Christian.

The Pike Patriots slopped their way through a wet field on Wednesday afternoon to prepare for their first road game of the season Friday against Abbeville Christian.

The weather forecast calls for rain on Friday evening and Patriots head coach Gene Allen used Wednesday’s wet weather as an opportunity to get prepared.

“We got a lot of rain, but it’s fine,” Allen said. “It’s supposed to be wet Friday night and we need to work with a wet football.”

The Patriots started the season 2-0 after picking up wins against Kingwood Christian and Clarke Prep. The Patriots led throughout the game, but held a mere 8 point lead entering the fourth quarter before they pulled away late to secure the 28-6 win.

“Defensively, I thought we played pretty well,” Allen said. “We gave up a few too many passing yards, but we got it corrected. We have to tackle better this week because they have some really good athletes.

“Offensively, we didn’t play as well as we could play. We made some mistakes but they are things that could be corrected.”

One bright spot from Friday night was the running game. In his first game with the Patriots, running back T.K. Thomas rushed for 100 yards and scored two touchdowns while fellow back Reed Johnson rushed for 74 yards on 12 carries.

“We were pleased with that,” Allen said, “We thought the power part of our game was good. We didn’t throw the ball really well. We had to do some things that we didn’t plan on doing. They did some things to confuse us a little bit. We didn’t block a few things correctly, which was one reason why we jumped into the power set.”

With the weather looking dicey this Friday night, the Patriots will have two running backs they can go to in Thomas and Johnson.

“Both of them are really good power runners,” Allen said. “They have good speed so that is always a plus. We feel like if we need to get a couple yards that we can get it. Both of them handle the ball well and catch the ball. T.K. and Reed both ran the ball well the other night. Hopefully they will continue to do that for the rest of the season.”

Abbeville Christian is on the schedule this week for the Patriots, and even though they are a 1A school, Allen is expecting a strong challenge out of the Generals. The Generals made easy work of Northside Methodist last weeks, beating the Knights 41-10.

“They are a very athletic team,” Allen said. “Their quarterback is just a tenth-grader, but he played last year and he is a very good player. He has great speed and we have to tackle him. If he gets loose, we don’t have anyone that can catch him.

“They have some really good skilled athletes. They do a good job and they will dress as many as we dress, so as far as depth, it is really about the same. They are the best team that we have played this year.”

The Patriots are 14-6 all-time against the Generals. They defeated Abbeville at home last year 48-12.

“It’s our first road game, but it’s not that far away so it doesn’t change our plans,” Allen said. “The big key is holding on to the ball. You can’t have turnovers. We have to be able to throw it a little bit and be able to handle a wet ball.”