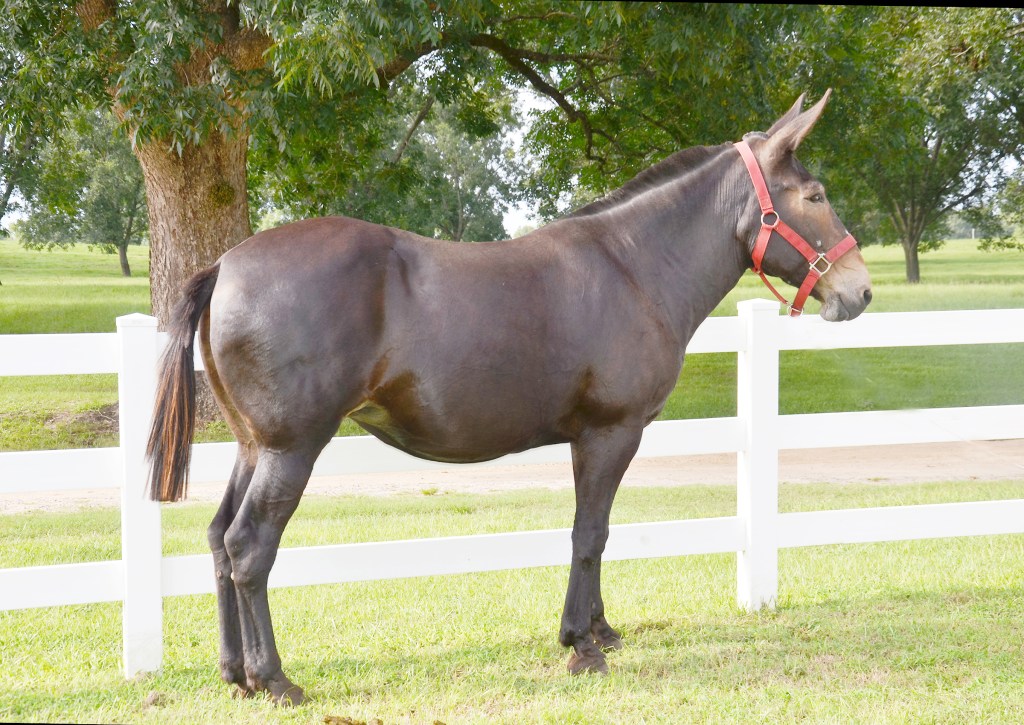 Messenger Photo/Jaine Treadwell Don Renfroe’s mule Kate is the latest entry into the Humane Society of Pike County’s Pet Photo Contest. Renfroe said the mule is often mistaken for ahorse, but her three-bell tail gives her away. The society is still looking for more entries to be submitted before Friday’s deadline.

A mule with a three-bell tail is now entered in the 2018 Pet Photo Contest, which is sponsored annually by the Humane Society of Pike County.

With the clock winding down to the contest entry deadline 5 p.m. August 11, entries are expected to be brisk.

But perhaps, no one expected an entry from the Renfroe Mule Stable in rural Pike County.

Don Renfroe’s matching pair of hee-haws, won the HSPC’s Pet Photo Contest going away in 2014.  The Minnie Pearl and Grandpa Jones look-alikes won the hearts of mule lovers near and far.

But, Kate? Now, that’s a mule with a different tail and tale.

For those not versed in mule-ology, Kate is easily mistaken for a horse – a thoroughbred.

Sleek and shiny and proud, with her ears held high. Kate is not your grandpa’s plowing mule.

But, for those in the know, Kate’s three-bell tail is a tail-tell sign that she is indeed a mule.

As for Johnny Rebs, Renfroe said they didn’t have to clip their mules’ tails.

“They knew what their mules could do,” Renfroe said, with a smile.

And, he knows what his mules can do. That’s why he decided to enter Kate in the 2018 Pet Photo Contest.

“First, it’s for a real good cause – the humane society’s spay/neuter program — and, then, Kate deserves to be on the cover of the calendar,” Renfroe said. “She’s been on many, many trail rides, in countless parades and participated in scores of school functions. She’s hauled brides and grooms and she’s pulled caskets for funerals.

“Why, Kate has hauled Hank Williams, Jr. and Kidd Rock. She’s even hauled Joey Strother and Brochie Galloway. That ought to count for something.”

Kate’s favorite place to ride is the Pioneer Museum of Alabama and especially over “Mr. Poole’ Covered Bridge.”

Renfroe said when Kate kicks the bucket, his aim is to have her preserved as a trophy mule and forever at home at the Pioneer Museum of Alabama that “she loves so much.”

“Roy Rogers and Trigger won’t have anything on me and Kate,” Renfroe said.

At age 30, Kate’s not stepping out as much in style and Renfroe said all she wants in return for the many miles she had packed and pulled and even been ridden, is to win the HSPC 2018 Pet Photo Contest.

But Renfroe knows that every pet owner thinks and feels the same about his or her pet. He encourages others to enter their pets in the contest and everyone to vote for their “pick of the litter” and help reduce the number of abandoned and abused dogs and cats in Pike County.

Entering a pet in the 2018 Pet Photo Contest is simple. Mail an 8×10 photo of the pet with the owner’s name, address and phone number, the pet’s name and the $10 entry fee to HSPC P.O. Box 296, Troy, AL 36081 or drop the entry off at The Little Framery, Troy Antiques, Guynn’s Income Tax and Bookkeeping Services in Troy; Jinrights Hillside Antiques on U.S. Highway 231 south of Troy; and EEZTEC in Brundidge.

Voting may be done at the same mailing address or at the same locations. Votes are only $1 each.