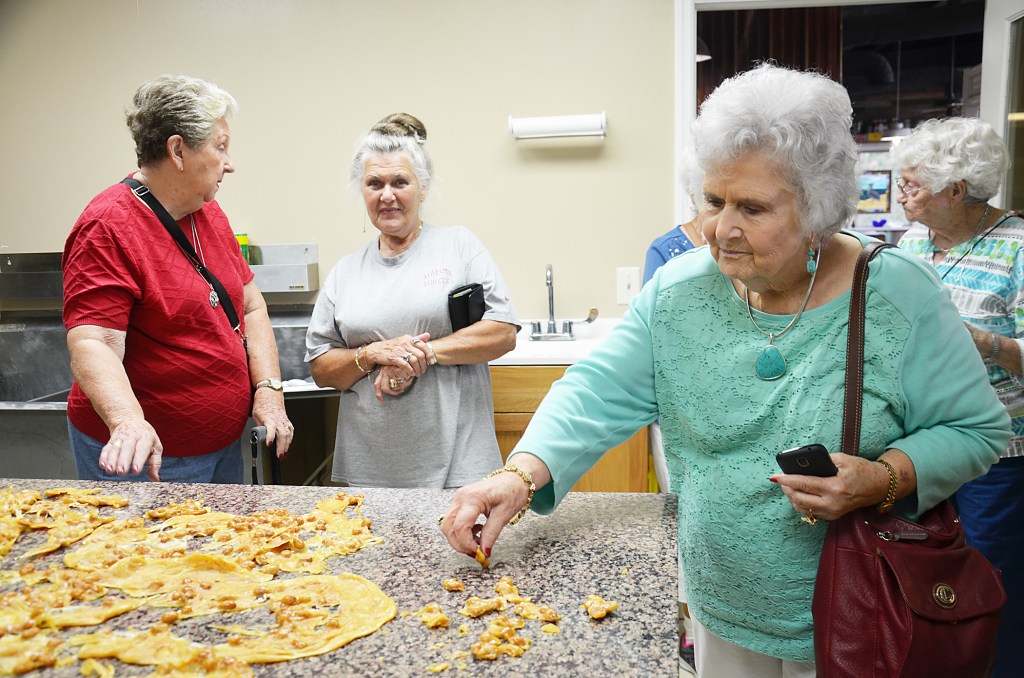 Bud’s Bunch, mystery-trip travelers from the Birmingham area, visited The Nut Shop on Highway 231 south of Troy on Tuesday. The visitors were treated to samples of the nut shop’s homemade candies and got to watch as Linda Jones made peanut brittle. The shop also has pecan and cashew brittle. Some of Bud’s Bunch could hardly wait to get a taste of homemade peanut brittle at The Nut Shop on U.S. Highway 231. Bud’s Bunch has visited other Pike County sites and plans to be back to see the terracotta warriors on the campus of Troy University

About 20 years ago, Walter “Bud” Stengell decided to organize a one-day outing primarily for senior adults. He thought it would be fun to load a bus and head out to “destinations unknown.”

The idea quickly caught on with senior adults in and around Birmingham. Now, two decades later, Bud’s Bunch is still heading out the second Tuesday of each month without a clue where they’ll end up. And, it could be anywhere in Alabama or even Mississippi or Georgia. Wherever the notion strikes Bud.

“I call it a mystery trip,” Bud said. “We start out with breakfast and then from there, who knows, except me. But the bunch knows we’ll end up somewhere interesting and fun and it could be anywhere the food is good.”

Navie Stinnett has been traveling with Bud’s Bunch since 2003 and she has enjoyed most every mystery trip that she’s been on.

“That’s the fun of the trip, not knowing until you get there,” Stinnett said.

For whatever the reason, Bud decided to take another trip down south to Pike County. Two previous trips to the county had been very successful. The third should be the charm.

“We’ve been to the Pioneer Museum of Alabama or, as it was then, the Pike Pioneer Museum,” Bud said. “We were out there when the older gentleman that founded the museum – Curren Farmer – was still around. It was a good trip.”

And so was the mystery trip to the fabrication shop of Brundidge artist Larry Godwin.

“Now, he’s some good artist,” Bud said. “He made a rooster out of chrome car bumpers. That was really something to see. People everywhere talk about that rooster.”

On Tuesday, Bud turned his bus south from Birmingham confident that he was going to give his Bunch something to crow about.

When the bus pulled up at Adams Nut Shop on the busy highway south of Troy, members of the bunch didn’t know what to expect.

She and the rest of the bunch were soon to find out. Charles Adams, shop owner and glass artist, had a tray of Adams’ homemade candies to sample as ladies and gentlemen strolled around his glass studio.

The bunch “oohed” and “aahed” over the stained glass creations. They encouraged each other to “see this” and “see that.” But, things really got interesting when Linda Jones began to pour up the peanut brittle in the Nut Shop’s kitchen.

Jones has been with at The Nut Shop for 35 and she is a master candy maker.

“Making peanut brittle’s not all that hard,” she told Bud’s Bunch. “But once you get started, you have to stay with it.”

Jones poured the candied syrup on the marble tabletop with the warming to Bud’s Bunch that “it’s hot!”

They listened as Jones told them about the candy making process. Most waited impatiently for the peanut brittle to cool so they could sample a piece. A few, just could keep their hands away.

As they waited, Adams told how the Nut Shop got started. Catherine Walker shared the story of how the first peanut brittle she made turned green. And several members of the bunch remembered Larry Godwin’s rooster and expressed interest in seeing it again. They all agreed that most all of the mystery trips have been fun. However, they also, laughingly, agreed that they have visited one too many military museums.

They thanked Adams and Jones for their hospitality and said “a lip smackin” good time was had by all. Then they were off to a noontime buffet, perhaps, too full of homemade candy, “to get our money’s worth.”