STORIES: Three ladies offer their memories of growing up in Brundidge 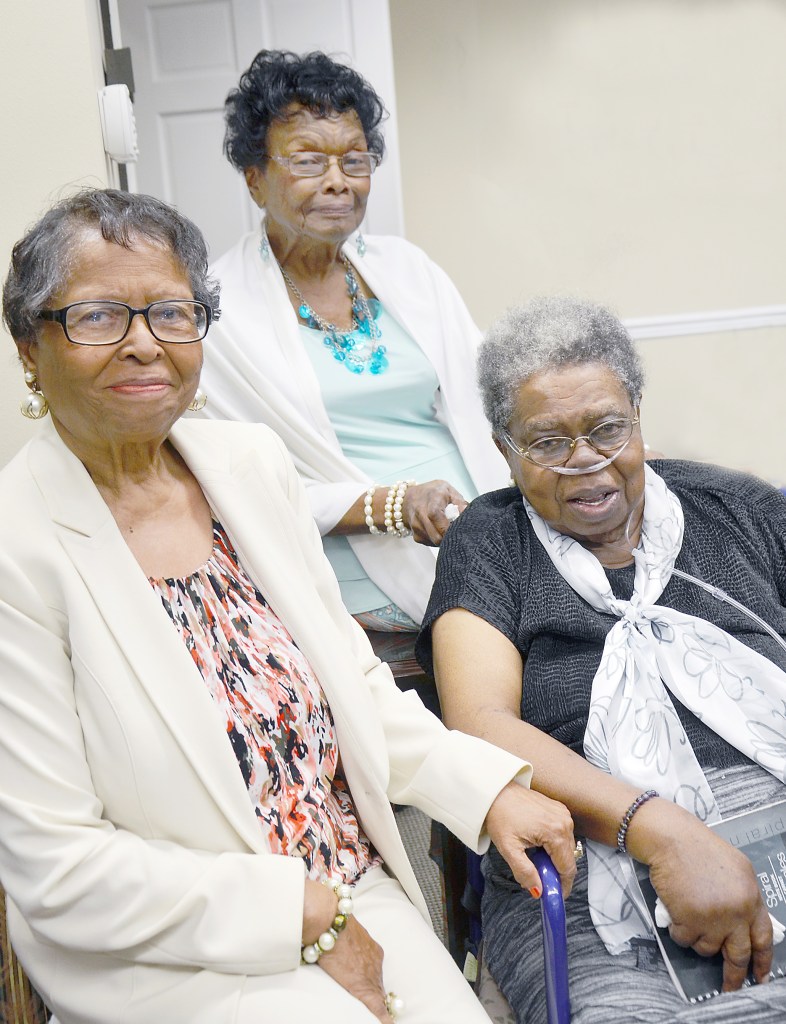 Geraldine Snell, Lois Robinson and Dorothyrine Munningham were the guest speakers at the Tupper Lightfoot Memorial Library in Brundidge Saturday afternoon. Their program was titled, “My African American Roots – My Town Brundidge” and was a featured event of the library’s Local History and Genealogy program.

Although the ladies grew up without material wealth, they said they were rich in the things that matter most in life – love, God-fearing parents, good neighbors and a strong work ethic.

“There were six girls in my family,” Snell said. “We were poor but we didn’t know we were because everybody was just like we were.  Our parents were God-fearing. We loved God, each other and our neighbors. People back then believed in honest, clean living and hard work. We picked cotton and hoed peanuts and, when night came, we were tired and we went to sleep.”

As a little girl, Snell said she viewed the world with a “childlike mind” and found happiness in the simple things like playing paper dolls and hopscotch.

“We walked everywhere we went and we didn’t mind,” she said. ‘I enjoyed my family and my friends. But there were hard times, too. I learned that sometimes people will pull you down and your battle will be uphill but you should never quit. Just keep the faith and keep on going.”

Robinson’s father was a sharecropper who worked tirelessly but managed only meager existence for his family.

“There were 12 children in our family and we worked in the fields and we worked hard,” Robinson said. “There was no welfare. We grew what we ate and my daddy made ‘arrangements’ at the bank to get money for things we couldn’t grow ourselves like flour, sugar and shoes. When the crops came in, he’d go back and clear with the bank.”

Families usually had meat to eat because they shared hog killings, which Robinson said was an exciting time. People back then, enjoyed being together even if it meant working together, she said.

Church was an important part of family life. Robinson said her family went to church on a wagon. There was no question about going to church. Everybody went.

She remembered picking cotton and shaking peanuts and raising pigs.

“I remember a dog named Joe that belong to Mr. Howell Leverett, I was so scared of that dog,” she said. “I remember playing in car boxes on the railroad tracks and having to go to the back of the café to get a cone of ice cream.

“We played games that we made up like rock school. Girls made mud cakes with dark dirt for the cakes and light dirt for the filling. The boys made flying Jennies. We rolled wheels with wires. We found ways to amuse ourselves.

“Problems are going to arise but God is good all the time. I thankful to Him that I’m able to open my eyes.”

The audience participated in the conversation and joined with the talk of springboards and chinaberry limbs that became Shetland ponies. They said when company came, “papa” would tell mama to “kill another chicken and put another plate of biscuits in the oven.”

They talked of milking cows, drawing water from the well and having to walk the long dirt road to meet the bus on the paved road.

One talked of the Y-Kings and fried meat and syrup biscuits and for the want of bananas. Another remembered the good taste of sweet potatoes cooked in ashes and the hurt of the taunting of the bus children as they walked to school. Several praised their teachers at Pea River Rosenwall Junior High School for paving the way for them. Others remembered the thrill of Christmas that seemed to come only every two years.

All remembered the good times and the love and caring of a close-knit community. Most of all they learned that riches don’t always buy happiness. Love, family, friends and a close relationship with a loving and forgiving God don’t come with a price tag.

The program concluded with a simple reminder to  “measure twice and saw once” to ensure much smoother sailing ahead.