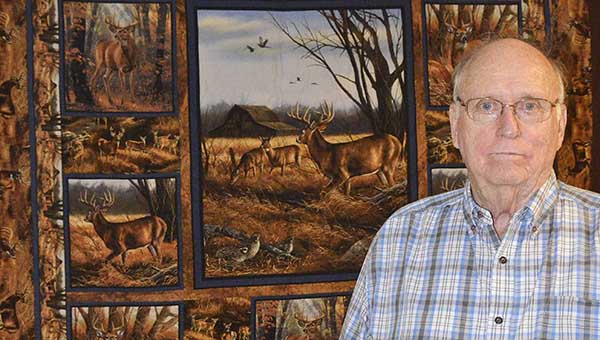 Larry Whaley is one of many local quilters whose work is on display at the Pioneer Museum of Alabama. Whaley has 19 quilts in the biennial show all of which have a wildlife theme. He uses a large hoop rather than a quilting frame. The hoops allow more mobility when stitching around the animal details.

The Pioneer Museum of Alabama’s 2017 Quilt Show, which runs through March 15, features more than 100 quilts on loan from local individuals. Many are heirloom quilts while others are only as old as yesterday.

Women have been quilting in some form or fashion since fishbones and thorns were first threaded and pushed through animal skins.

However, quilting is not an art that attracts many men. And, had it not been for an illness, Larry Whaley of Troy might not have taken up the art.

Whaley was an outdoorsman. He enjoyed hunting and fishing. Being sick put a halt to those hobbies. So, he looked for a constructive way to pass the time.

Quilts and quilting crept into several conversations with family members and friends.

“When I was growing up my mother and other women in the community would get together at different houses or at the church and quilt,” Whaley said.  “All we had for heat was a wood burning heater so it took a lot of quilts to keep us warm.”

Whaley remembered the brightly colored squares that made up the quilt designs. He remembered the cozy, warmth the quilts provided and also the heavy weight that bore down on his body on those long winter nights. They were “warm” memories.

It was 2008, when Whaley decided he would try quilting to pass the time. His idea was to incorporate his love of wildlife and the outdoors into quilt designs.

“I had worked putting down carpet and sewed the seams by hand with a big curved needle,” Whaley said.  “I had also worked as a sewing machine mechanic so I knew how to sew.  When I got started quilting, I enjoyed it and I’ve been quilting ever since.”

Whaley’s interest in quilting got a boost when he won a quilt design competition at Walmart in Ozark.

“You had to design a quilt block and name the design. I used catfish seed sacks and a star design,” Whaley said. His Nature’s Star won the competition.

For many of those quilts, Whaley used wall hanging pictures of wildlife for the center and designed complementary borders.

“Deer, bears, bobcats, eagles, any form of wildlife interests me,” he said. “I want the animals to stand out so I quilt around each one. It takes a while but it’s worth it.”

Whaley doesn’t use a quilting frame. He uses a large hoop which he can turn easily to quilt around the small animal details on the designs.”

Whaley also has a competitive spirit even when quilting. He heard a woman say it took her 10 years to complete a Cathedral Window design quilt. He finished his wildlife Cathedral Window quilt in only three months. It is entered in the museum’s quilt show.

Whaley’s interests aren’t limited to hunting, fishing and quilting. He makes walking sticks from winter huckleberry bushes and carves the handles. He does wood and metal work and collects arrowheads.  He’s a man who just likes to stay busy.

The public is invited to visit the Pioneer Museum of Alabama and see Whaley’s quilts and the other nearly 100 quilts on display. The museum is open from 9 a.m. until 5 p.m. Tuesday though Saturday. Admission is charged. The quilt show is included in the admission price.