The Charles Henderson Junior Varsity kicked of the 2017 season with 2-0 shut out victory over the Rehobeth Rebels at Hogan’s Hole on Thursday afternoon. 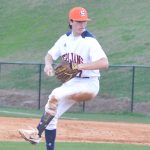 Messenger Photo/mike hensley
Brock Huner took the mound for the Trojans on Thursday and pitched a complete game shutout in Charles Henderson’s 2-0 win over Rehobeth in game one of a double-header.

Three Trojans tallied hits against Rebel starter Jonah Clark. Keonte Brantley finished 2-2 at the plate with one run batted in. Huner tallied one hit in one official at-bat, while Jackson Giles finished 1-2.

The Trojans jumped on the scoreboard first in the bottom of the first inning when Scarbrough drove in Chance Pollard on a short sacrifice fly behind first base.

The Trojans doubled their lead to 2-0 in the third when Brantley singled in Huner before being thrown out at second base.

Although Huner made it through all five innings, he did have to do his fair share of escaping. After getting the first two outs of the second inning quickly, Huner allowed the Rebels to load the bases before inducing a fly out to Pollard to get out of the inning.

The 2-0 win was game one of a double header on Thursday. The Trojans finished off the sweep in game two when they defeated the Rebels 12-2.

The Trojans will be back in action on March 3 when they host Enterprise.