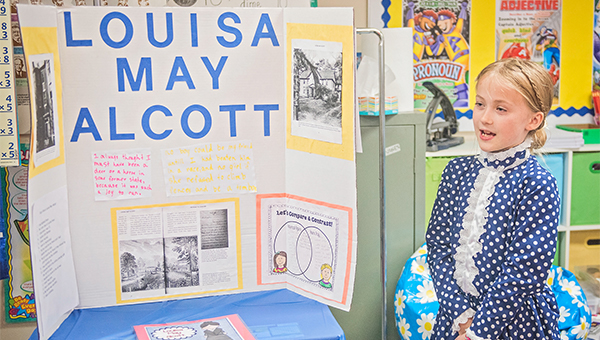 The students took on the persona of some of the most notable individuals in America’s history and, with a touch of a button, the “wax figures” would come to life and tell their stories.

Betsy Jones, third-grade teacher, said her students chose historical individuals with whom they could identify and researched the lives. They designed display boards with photographs and other memorabilia that told the stories of a variety of great Americans, that included those as familiar as the Wright Brothers and those as unfamiliar as Ruby Bridges.

Clay and Cooper Johnson chose the Wright Brothers because they are brothers and they like the idea of designing and flying airplanes.

Gabriel Christian Jones chose to portray Robert E. Lee because his grandfather is a fan of the great Southern general.

Penelope Earnest wanted to be Louisa May Alcott because she, like Alcott, likes to write. Penelope said an interesting and little-known fact about Alcott is that she ever had any pets. Probably, because her family was too poor to care for them, Penelope said.

Andrew Dixon was Stonewall Jackson and Trey Drivas was Blackbeard because they – Stonewall and Blackbeard — were always up and ready for a fight.

The students in the upper grades dressed as their favorite great Americans and entertained the younger students with stories and even a few antics.

For the students, it was a great learning experience and an opportunity to walk in the shoes of their favorite American.