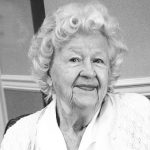 Mrs. Irene Powers Hathaway, 94, of Troy, Alabama passed away December 3, 2016 at Dale County Medical Center in Ozark, Alabama.  She was born in Adel, Georgia on October 13, 1922 to her late parents, Thomas and Cora Lee Davis Powers.  She was a member of Park Street Methodist Church in Troy where she had lived since 1975.  Mrs. Hathaway was a homemaker, a retired auditor, and after retirement worked as a greeter with Wal-Mart.  She also served her country during World War II by packing parachutes and working with the USO.

She is survived by four daughters and two sons-in-law: Betty Jo and Larry Savoie of Troy, Barbara Ann Hathaway of Troy, Claudia Jean Amari of Merritt Island, Florida, and Margaret Rose and Keith Harvey of Asheville, North Carolina; a son, John William Hathaway, Jr. of Ozark; four grandchildren: Brandon Savoie, Paula Holk, Nathan Amari and Alexa Harvey; and two great-grandchildren: Kendall Savoie and Preston Holk.  She is also survived my many nieces, nephews and cousins in the Adel area.  In addition to her parents, she was preceded in death by all of her siblings.

A funeral service for Mrs. Hathaway will be held Tuesday, December 6, 2016 at 11 AM in the Chapel of Boone Funeral Home.  Interment will follow at Woodlawn City Cemetery in Adel.  The family will receive visitors one hour prior to the service at Boone Funeral Home, 1804 S. Hutchinson Ave., in Adel.  Special musical selections to be played are “In the Garden”, “Amazing Grace” and “My Way”.  Condolences may be expressed to the family at www.boonefunerals.com.

–Boone Funeral Home of Adel, Georgia is in charge of arrangements.