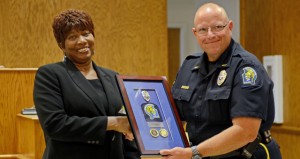 MESSENGER PHOTO/COURTNEY PATTERSON
Joyce Peagler retired from the Troy Police Department Friday as a dispatcher. Peagler served for 27 years, longer than anyone in the history of the City of Troy. Above, Troy Police Chief Randall Barr congratulates and thanks Peagler for her service during her retirement ceremony Friday.

After 27 years of service, dispatcher Joyce Peagler retired from the Troy Police Department.

“Everyone can’t have a job like a dispatcher,” said Troy Police Chief Randall Barr. “When you get up and go to work, you don’t know what may be on the other side of that phone call every time it rings.”

Peagler began her career as a dispatcher on Sept. 28, 1988. Peagler is the second dispatcher to ever retire from the Troy Police Department, and her service will be truly missed by the department and the community.

Troy Mayor Jason Reeves recollected on his teenage years when his father worked at the police department. He said that he would have to call dispatch to speak with his father and Peagler would answer.

“I always knew that when I heard that sweet, comforting voice answer the phone that somebody was going to help me,’ Reeves said. “I knew that if that’s the way I felt, that’s the way the public felt, too.”

As years went by and Reeves became mayor, he said he had a peace knowing that Peagler was one assisting the community as a dispatcher.

“I’m so proud of (Peagler), and I thank (her) so much for what (she has) done for me and this community all these years,” Reeves said. 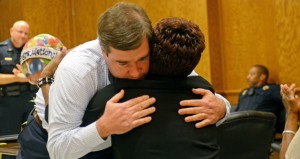 MESSENGER PHOTO/COURTNEY PATTERSON
Troy Mayor Jason Reeves hugs Peagler after sharing stories of how she has served in the past 27 years.

Reeves said that Peagler retired with the longest service dispatcher in the history of the City of Troy.

Barr added to Reeves’ comments, saying that her job was “two-fold.”

Community members attended the ceremony, thanking Peagler for her service to the City of Troy and congratulating her on her retirement.

Neal Armstrong, court administrator from the City of Troy, said Peagler was there when he first began working in Troy and when he returned 15 years later.

“She I still the smartest, most beautiful and bright lady I’ve ever met,” Armstrong said. “I thank (her) for (her) service to the City of Troy.”

Councilwoman Dejerilyn Henderson grew up with Peagler and wanted to express her thoughts at the ceremony.

“I’ve always loved Joyce and her family,” Henderson said. “We have a long history together. I’m so proud and happy for (her) today. Congratulations.”

As Peagler listened to all the kind and encouraging words from the department and the community, it was obvious that she was touched and loved them all in return.

“I would like to thank Chief Barr and thank God for helping me make it this far,” Peagler said. “I appreciate everything that anyone has ever done in this department and in the City of Troy.”

Givhan to step down in July

PLAS students are exposed to the Under Age Under…