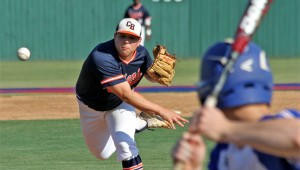 Senior pitcher Austin Ingram lets one go for the Trojans against St. Paul Episcopal School in the quarter-final round of the Class 5A state playoffs.
MESSENGER PHOTO/DAN SMITH

For the first time since early January, there were no baseball practices at Hogan’s Hole Monday. For years, everyone has looked at the schedule of 2013, 2014 and 2015, and knew the potential for great things to happen was in store for each season of Charles Henderson High baseball. In 2013 and 2014 CHHS ended the year with a state championship in Class 4A, but this past weekend the season came to an end at the hands of St. Paul Episcopal School in the quarter-final round of the Class 5A state playoffs by scores of 2-0 and 10-5 in Mobile. Success is not always measured by how many trophies are in a trophy case. What is certain is that baseball is a great game played by two teams fielding no more than nine athletes in the batting order at a time, and what is certain is that no one knows the future. One can only prepare, execute, and hope preparation, talents and skills are all present and accounted for when they are needed most, and through highs and lows, each man always display exemplary character. Head Coach Derek Irons coached his first game at CHHS in 2009, and has seen many talented players and teams come and go. This team was special to Coach Irons.“I’m very proud of this team and their work ethic, attitude, and effort that began way back in August,” said Coach Irons. “To play 39 games against the best teams in Alabama and even teams outside of our state have to offer and win 35 of them is a great accomplishment. They have done a fantastic job of continuing the rich tradition of CHHS baseball while writing their own chapter. “Over the last three years these seniors won 113 games, captured three area titles, won two state championships, and had a 24-3 record in the playoffs. They were ranked No. 1 during every single ASWA poll of their varsity careers. They were fantastic leaders for our program this year and led the charge of keeping the momentum going this year from the past two seasons. It would have been extremely easy for them to get complacent with what was accomplished in the past but they didn’t do that and provided great leadership for our program.” Playing their final game as a CHHS Trojan were six seniors that complimented a strong roster of underclassmen. Seniors of 2015 include Jason Fleming, Reilly Fox, Wright Graning, Austin Ingram, Chase Smartt and Cole Wilson.“It’s a unique privilege that every CHHS baseball team has to write their own chapter in the history of CHHS baseball,” said Coach Irons. “Our players understand the tradition that has gone before them and are grateful to the players and coaches of years past that have made our program what it is today. I’m extremely proud of the chapter that was written in 2015 and of the young men that wrote it.”While CHHS baseball has received dynamic leadership for seven seasons under Irons, he has always had a first-class group of assistant coaches, and is appreciative of their service this season.“Our program is so blessed to have the assistant coaches that we do,” said Coach Irons. “Coach Brandon Lee and Coach Brett Stallworth put in so many hours with our guys all year around. They do a fantastic job of developing the players we have. Coach Sam Kitchens and Coach William Teal have been great for many years at developing our young players. We have had numerous players step right in to starting roles on the varsity and flourish because of the preparation they are given by Coach Kitchens and Coach Teal.”CHHS finished the year with a record of 35-4.

Mike Hensley has joined the staff of The Messenger as a sports reporter. Hensley, who is from Fairhope, is a... read more