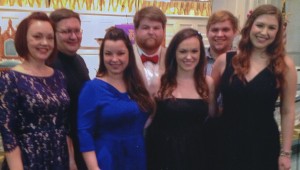 The Troy Music Study Club, organized in 1905, honored its founders Feb. 22, when it presented a concert in the sanctuary of First United Methodist Church. The program was opened to the public.

Lyndia Dew, president, welcomed the members, guests and program participants. William Denison, choral director of the music club led the singing of the Federation Hymn, accompanied by Lyra Crapps at the piano.

John Jinright, program coordinator, introduced Dr. Christi Amonson, professor of voice in the John M. Long School of Music at Troy University since 2012. She not only teaches voice, but she directs the opera workshop at the university. Amonson lives in Troy with her husband, Nick, and daughters, Ginger, Daisy and Violet. Amonson introduced senior voice students who presented the following program accompanied by Jinright.

The purpose of the Troy Music Study Club is to support and promote good music in the schools and the community. In addition to sponsoring an annual Founder’s Day concert, other programs are open to the public and the club gives one or more scholarships to graduating seniors from high schools in Troy and Pike County.

Their next meeting is March 23.