Tarentum school: Then and now 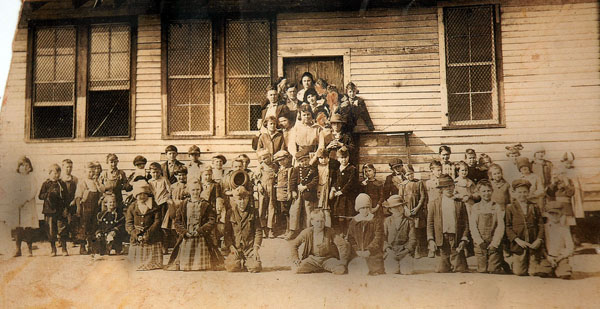 Students pose in front of the former Tarentum community school. Classmates recently gathered to reminisce about the school’s impact on their community and their lives.

If the walls of the old Tarentum Schoolhouse could talk, oh, the tales they could tell.

“That’s why they tore in down,” Wallace Mobley, an organizer of the Tarentum School Reunion, said laughing.

Between 75 and 100 alumni of Tarentum School gathered at the Tarentum Community Building Saturday to renew friendships and pay tribute to the school that laid the foundation for who they are today.

“We got our basic education at Tarentum School and, for some of us, that was just about the extent of our formal education,” Mobley said. “After I graduated from Tarentum School, I only got to go Brundidge one year because my daddy was a sharecropper and he needed me to help work on the farm. It was like that for a lot of the boys.”

For the students at Tarentum School, the opportunity to go to school was greatly appreciated. For many of them it was a welcome diversion from their daily chores.

“School didn’t keep us from going to the fields and doing other work around the farm, but it did give us something to look forward to,” Mobley said.

“We were proud to be a school so we behaved,” said Karo McWaters. “We didn’t get into too much trouble.”

Jo Harris explained the children knew they had better behave “because if we didn’t we knew what we’d get when we got home.”

The students all agreed that the teacher was always in the right and, if they got in the wrong, a whipping would be waiting for them when they got home.”

Mobley said “Miss’ Pete Galloway was the in charge of the school cafeteria and she fed the students well.

“Some of us had to help in the cafeteria and “Miss” Pete made us wear hairnets to serve,” Wallace said. “We didn’t like it but we did it, without question.”

The school was heated, first with potbellied stoves, and later modern radiators were installed.

“We never got so modern that we had indoor toilets,” Mobley said. “We had long outhouses, one for the boys and one for the girls. They had wood walls in front of each of them for privacy.”

Winnie Merle Helton said that it was at the girls’ outhouse that she learned about the birds and the bees.

“Mary Helen would tell us jokes but we wouldn’t understand the jokes and she would have to explain them to us. Of course, we had a lot of questions and she could answer them all,” Helton said, laughing. “If it hadn’t been for Mary Helen and the outhouse, our sex education would have gone lacking.”

Tarentum School was the traditional kind of “old timey” school. Each morning started with a devotional followed with prayer and then a salute to the flag.

School assemblies were held each Friday and were highly anticipated happenings.

“The whole school would go to the assembly and, if you had a talent, you could take the stage,” Helton said. “Don Avant and Joey Lewis would always sing and that’s all I’ll say about that.

“There wasn’t much to do around Tarentum so we looked forward to anything. Many Saturday nights, Minifee Cressgal would come to the auditorium and show a cowboy movie – Tom Mix, Johnny Mac Brown, Gene Autrey — on a projector with two big reels. Usually it was a double feature and that was a big event for all of us.”

Box suppers were also big events at Tarentum School. The women in the community would decorate boxes and fill them with a supper fit for a king.

“The men would bid on the boxes and then get to share the one they won with the lady who had cooked it,” Helton said. “Box suppers were popular community events.”

Addie Pearl Johnson was the most senior Tarentum School alumnus in attendance at Saturday’s school reunion. But, she said going to school at Tarentum was not much different when she started there in first grade.

“We had one teacher for three different grades and we read about Dick and Jane,” she said. “We wrote in lined, blue tablets with a horse’s head on the cover. That was about all we had except for a few color crayons. But we loved school and were happy to be there.”

Johnson said recess was a favorite part of the school day.

“We all went outside at one time but the boys usually went over on one side of the grounds and the girls on the other,” she said. “We played simple games like dodge ball and farmer in the dell.

The children took their lunches and, if the weather cooperated, they went outside and either ate on the grass out in the sunshine or under the shade tree where it was cool.

Johnson said, when she was at Tarentum School, the students “did a lot of memorizing.”

“We memorized songs and poems mainly but we also had to memorize a lot of our history lessons, important speeches and things like that,” she said.

“I always liked the morning devotionals and the assemblies where we sang. We didn’t have a piano. We just opened our mouths and sang.”

Although Tarentum School wasn’t a big school, it was a good school and prepared the students well.

“That’s why we keep wanting to come back,” Mobley said. “We really appreciate the education we got at Tarentum School. It made us who we are.”

Helton said most of the students who attended Tarentum School were not wealthy in a monetary kind of way.

“We were po’ but we didn’t know any better,” Helton said, laughing, and then added in all seriousness, “but we wouldn’t take anything in the world for our raising.”

A chorus of “amens” came behind that.