Make the mark: Ingram a humble leader as he puts his name in CHHS record books 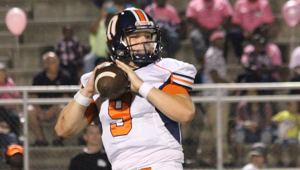 Austin Ingram is leaving his mark in the CHHS record books, and head coach Brad McCoy says the senior quarterback is respected ‘because of how hard he plays … he handles his business, goes to work.”
MESSENGER PHOTO/DAN SMITH

In the last 36 years there have been many successful quarterbacks to walk the halls of Charles Henderson High School, and Austin Ingram will be at the top of the list in more than one statistical category by the time he has played his final game.

Young men such as Jared Loftin, K.D. Edenfield, Brent Poole, Kevin Stephens, Pete Van Horn, Mark Davis and Barry Tucker are some of the notables on the career passing list since records were organized beginning in 1978.

While records and statistics are nice to have, the greatest gift of Ingram is his humble attitude and unquestionable leadership.

“From the very first day I met him, I could tell from his personality, he was humble and he was a leader,” said CHHS Head Football Coach Brad McCoy. “If you were to ask what kind of kid do I want at quarterback, it would be exactly what Austin brings to the table. When it comes to leadership, he is not a very vocal type kid. He does not say a whole lot because he does not have to.

“Everybody respects Austin because of how hard he plays. He is not a clown, he does not goof off. He handles his business, goes to work, and he’s always on time. For the most part he is executing to the best of his ability, and all the kids know that.”

Ingram played backup as a freshman in 2011, then set a single-season yardage record as a sophomore with 2,148 yards and broke that record as a junior with 2,480 yards.

With no offensive linemen returning from last year’s squad, what Ingram has done is not only impressive, but speaks highly of the progress a young team has made. Ingram has passed for 1,403 yards this year with three games or more to play, and is in position to own first, second and third place in the record book.

The Trojans, 6-2 overall and 4-1 in Class 5A, Region 2 play, have two regular season games on the schedule and with a win at Booker T. Washington of Tuskegee this Friday will secure a playoff spot. Booker T. is 1-7 overall this season.

The name Ingram is not new to the first-team squad at CHHS, as Charles Ingram was a standout in the 1960’s, his son Chuck was a leader in the 1980’s, and now Austin looks to his father and grandfather for advice and guidance.

“They kind of pick and choose when and what advice to give me,” Ingram said. “The biggest thing is that they have always been there for me, and I’ve been blessed to have those two with me my whole life. They just make sure I’m doing the right thing, but the most I get from them is leadership, than anything. That’s what they want me to do the most is be a good leader.”

The Trojans lost 17 of 22 starters to graduation off the 2013 team that reached the AHSAA state championship game, and this year they have found talent from the same CHHS hallways, talent that had previously never played varsity football.

Jalante Smith, Coby Griffin, Rilly Fox, Christian London, Cameron Fayson, Terrell Woods and Nick Lewis are some of the newcomers that have made a big difference, among others.

“We’ve been blessed, as we have had a lot of kids come out to play football that have never played before that are just athletes,” said Ingram. “That’s what I feel like my job is as quarterback, not so much as to make the play but to let our athletes make the play. My job is to get the athletes the ball and let them make the plays.”

With a different makeup and different chemistry than a year ago, Ingram knew the Trojans had to find an identity.

“This year has been different than the last couple, as we came into this season not really knowing our identity,” Ingram said. “That’s kind of a good thing, as we are starting to figure out what we do good and what we do best. The past couple of years we had returning players that were experienced and we knew what we had, but this year it took a lot of hard work to figure out who we were and what we did good.”

Ingram knows he has to not only be a leader and great teammate, but he also understands other young eyes are watching him.

“I know I have to be a good example to young kids all the time, that’s why, for me, I have to take care of my picture and my image because I want to try to set the right image for them coming up too,” said Ingram. “They like to kid around with me, but they are just nice to me and I try to be nice to them and just play around with them and let them know how they need to be, enjoy life, and that I need to be a good example to them.”

The Class 4A AHSAA Most Valuable Player in the state championship game last spring, Ingram will make a decision later as to if baseball or football will be his sport of choice in college.

But for now, Ingram and his teammates are looking only at Booker T. Washington this Friday night in Tuskegee, and keeping their focus on today, this week, and the next game.