McBryde tapped for Under Armour game 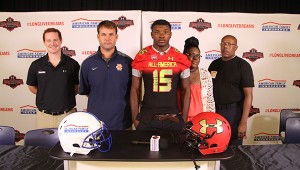 Charles Henderson High senior linebacker Richard McBryde became the school’s first football player selected to the prestigious Under Armour All-America Game. He’ll play in the game on Jan. 2, 2015, in Orlando, Fla., and was presented his jersey at a ceremony at the CHHS cafeteria Tuesday.

“It’s an honor for the chance to play in this game,” said McBryde. “When I found out this summer that I had been selected, I was very excited to get the opportunity, and also because I was the first one from Charles Henderson ever to be selected. It will be on national television, and that is also exciting.

“I started playing football when I was 7 or 8 years old, and from there I always had people tell me that I was a good player, but I would not allow myself to get the big head. As a freshman I played a little varsity, and I just started working hard and getting a little bit better ever since.”

CHHS Head Coach Brad McCoy shared with those in attendance that McBryde has great work ethic and great attitude, on and off the football field.

“We are very proud of Richard, and everything he brings each and every day to our football team,” said McCoy. “He brings so much to practice and games, and that is a tribute to his family. The City of Troy and Charles Henderson High School are very proud.”

This is the 8th Annual Under Armour football contest, and previous players include Jadeveon Clowney, A.J. Green, Julio Jones and Jameis Winston.

McBryde is off to a great start as a senior after a stellar junior year. Through six games, McBryde has 74 total tackles – 35 unassisted – five sacks, and 10 tackles for loss. He also has one pass breakup and one forced fumble.

Unfortunately for opponents, McBryde has also touched the ball a few times on offense, with 55 yards rushing on only four attempts and one touchdown.

McBryde was named the Class 4A Lineman of the Year during the Mr. Football banquet in Montgomery in January, following an 86 tackle, 23.5 tackles for loss and a six sack 2013 season.

He was also named to the Class 4A All-State Team by the Alabama Sportswriters Association, and was one of four linebackers selected to the 2013 AL.com Super All-State Football Team.

McBryde, who is ranked by 247 Sports as the No. 5 outside linebacker recruit in the state and the 16th in the nation, has committed to Auburn University and could play linebacker or safety for the Tigers.

The senior said his commitment to the Tigers is still firm, and he hopes to play either outside linebacker or strong safety upon arriving at The Plains.

McBryde’s mother, Brenessa Banks, credits her son’s work ethic and keeping his feet to the ground on his accomplishments on and off the football field.

“We are very proud of him,” Banks said. “I always told him to follow his dreams, and to put God first, and always make good grades. Without good grades, I told him that he would not get to where he wants to be in life. I also told him that no matter what, I would always support him.”

“I told him to always be very humble, no matter what the circumstances,” Rodgers said.

“We also told him to respect people older than him, as that will always come back to being a good and positive thing in life.”