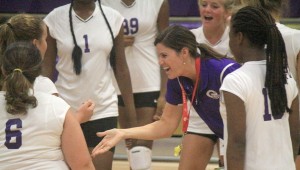 The Goshen Eagles’ volleyball team faced the Luverne Tigers Monday and came away with match wins for junior high, junior varsity and varsity.

Following the teams’ first area match up of the season Goshen volleyball coach Amy Warrick said she was astounded to have seen her junior high, junior varsity and varsity teams win against the Luverne Tigers Monday night.

“It was our first area match up,” Warrick said. “We’re area 2A. We were home against Luverne, and all of our teams won tonight.”

Warrick said wins like this weren’t common for the Eagles, but she was proud of all of her of junior varsity and junior high players.

“They both played great,” Warrick said. “I was very proud of both their teams.”

The varsity Eagles won their first game 25-2, their second game 25-6 and 25-8 in their final match against the Tigers.

Warrick said the Eagles had an all-around great night as a team, but complimented some of her outside hitters who played well in Monday’s games.

“We really went out there tonight,” Warrick said. “Kati Thomas is one of my outside hitters. She had 30 kills tonight. She usually has about 15 kills a game, but she had 30 tonight. Casey Allen had 20 kills tonight.

Warrick said no part of the team as lacking Monday night, including the servers.

“If Carmen doesn’t do great then our hitters don’t do so well,” Warrick said. “She was having a great time. She runs our offense. She’s a first year setter, but she had a great night. We sometimes forget the setter’s job and that she’s the one who has to set our hitters up in order for them to get the kills they did.”

Warrick said it was good to have the team’s first area win going into Tuesday’s match against Highland Home, another area team for the Eagles.

The Eagles will face Highland Home Tuesday at 4 p.m. at home. It will be the team’s second area game of the season.