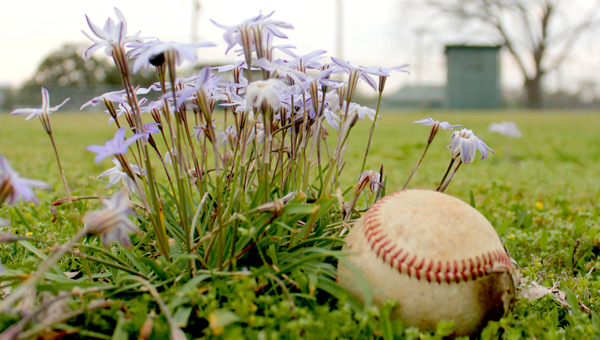 Flowers and an old baseball dot the outfield at Knox Field where young baseball players once roamed. (Photo/Ryan McCollough)

It has been years since the scoreboard lights glowed or the playing surface lined off at Knox Field.

But just like the cathedral-like stadiums of Fenway Park and Wrigley Field, the little patch of grass between Knox and Three Notch has a story to tell.

It is just waiting for someone to listen.

Knox Field, and the adjacent McGhee Field, were the original sites of some of the best baseball in the state of Alabama. It was on those fields that many of Troy’s most influential baseball figures, including former Major League player Brian Meadows, got their start.

Dan Smith, the Director of Troy Parks and Recreation, knows every inch of the park. He patrolled the outfield and infield as a young ball player, and the field holds an extra special place in his heart because of one “great, great day.”

“The only home run I ever hit in my life came at Knox Field,” said Smith. “That was made extra special because it was one of the only games my dad ever saw me play. That field will always have that special memory attached to it.”

Before the days of South Franklin and the Troy Sportsplex, Smith said Knox Field was the “happening place to be,”

Parades were held to mark the beginning of opening day, and every team had a queen, complete with tiara, dress and sash.

“At the time, Knox Field was the heartbeat of youth sports,” said Smith. “The majority of our youth coaches and dads played their baseball over there.”

The City felt the need to change the venue of Troy youth baseball, and built the fields on South Franklin Street in the 1980s, and later the Troy Sportsplex in the early part of the 1990s.

While no organized baseball is played at Knox Field anymore, there are signs it is still making memories.

A quick walk around the park will show home plate and the pitching rubber are still in the ground. The rubber in-ground bases have been removed, but someone has replaced them blocks of wood so that ball can still be played.

Sunflower seeds dot the ground near the dugouts and well-worn baseballs can be found hiding among the tall light-purple flowers that grow in the outfield.

“We know that ball field means a lot to a lot of people,” said Smith. “We try to keep it mowed and looking good, because we know kids from the neighborhoods play out there.”

Troy has captured numerous recreation league championships, and Charles Henderson and Pike Liberal Arts rank near the top of their respective classifications year-in and year out. The lights may no longer shine between the lines on Knox Street; the legacy of the field lives on.

“Any success Troy has in baseball has to be traced back to Knox Field,” said Smith. “That place changed the lives of a lot of young men, including me.”

MESSENGER PHOTOS | MONA MOORE War Eagle! And owl, and vulture and falcon – all were part of the Auburn... read more