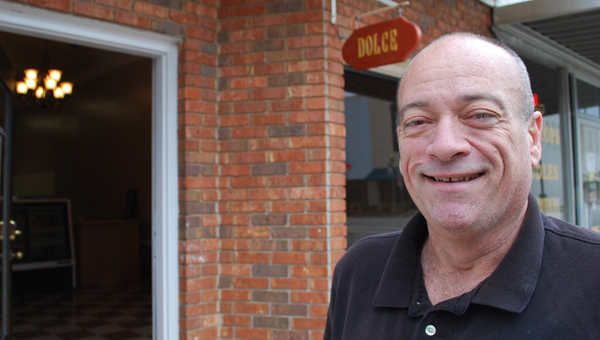 Jamey McDaniel brings his experience as a pastry chef to downtown Troy, where he is opening a bakery. The shop, ‘Dulce,’ fulfills his lifelong dream, he says.

When Jamey McDaniel worked as a piano teacher at Fuda Music, he used to imagine the day when he would open up his own business on The Square.

He might even have walked by 78 North Court Square and pictured it just as it is today, a French bakery days away from peddling croissants and cupcakes to morning commuters.

“This has been my lifelong dream,” he said.

McDaniel chose to name the bakery “Dolce” because it is a musical term and means “sweet” in Italian.

McDaniel got his first baking job in the 1980s.

He worked in bakeries in New York and Boston. In 1992, while working at The Continental Bakery in Birmingham, McDaniel’s gingerbread recipe was featured in “Southern Living’s American Country Christmas” cookbook.

McDaniel, a native of Ariton, returned home to be near family and friends and to start a new chapter in his baking career.

“It’s too cold up there,” he said. “Down here, I can easily see people getting their croissants and going to the park. Summer mornings are perfect for that.”

The floor tiles are shades of cinnamon and sunshine and the walls are a match. McDaniel has marble-topped cafe tables and a sideboard lined with covered cake glass cake plates.

“What I’m really going for here is a little taste of New Orleans,” he said.

He plans to play light jazz and a few of his favorite classical music pieces and start with a stuffed croissant as his signature staple.

“I’ll bow to what the populous desires and do the cupcakes,” McDaniel said. “But the croissant is what I really want people to fall in love with.”

The croissants will come in flavors like chocolate, apricot, pecan, cinnamon sugar and strawberry cream cheese.

As the business grows, Sanders plans to open for lunch with chicken salads, ham and cheese sandwiches and quiches.

By the end of the year, he will be ready to accept orders for wedding and birthday cakes.

McDaniel will start with a soft opening as he transitions from a fulltime employee to an entrepreneur.

The shop will be open Wednesdays, Thursdays and Fridays from 7 a.m. to 11 a.m.

Brian Steven Roberts The Alabama Department of Corrections is searching for an inmate who escaped while working in Elba Wednesday.... read more