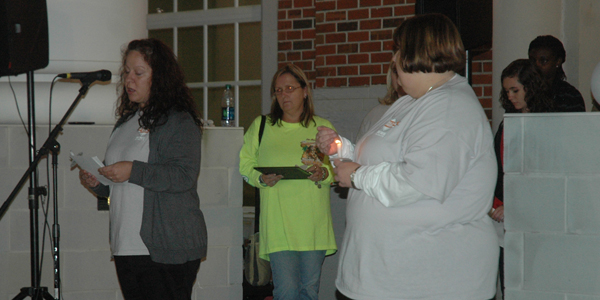 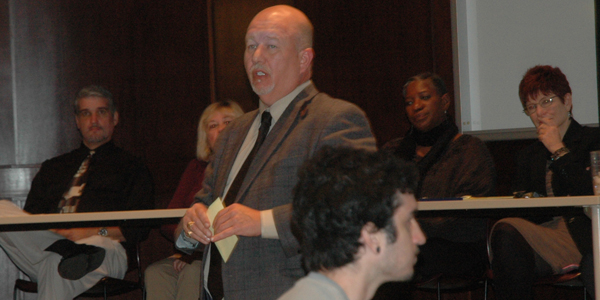 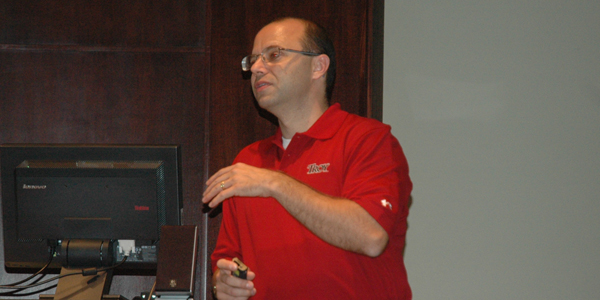 Greg Price gave a presentation on technology and bullying.

Pike County residents were able to learn about the epidemic of bullying this Thursday night in Troy when the university held a town hall meeting followed by a vigil to raise bullying awareness.

The meeting took the form of a panel discussion and question-and-answer section in which Pike County residents were able to ask specific questions about bullying.

Price gave a presentation on cyber-bullying before the panel discussion. Price serves as the head of the Alabama Computer Forensics Institute, a group that aids law enforcement officials in technology related criminal cases. “We work an enormous volume of cases involving cyber-bullying and child predators,” Price said. “It is basically anywhere where technology and bad things intersect.”

Price said the point of his demonstration was not to scare people away from using technology. “My goal is not to have you leave her frightened by technology,” Price said. “We want to bring awareness to communities of how this technology is being used.”

Price has worked with communities and victims all across the state. He said that all victims have one thing in common. “Victims share a common denominator,” Price said. “They did not know this could happen to them.”

Cyber-bullying can take on many forms such as having a private message forwarded without permission, receiving physical threats electronically, being the target of online rumor mills and having inappropriate photos posted publicly.

According to the U.S. Department of Education, since 1993, when the Internet first became widely used in America, the amount of children bullied in school has increased from 12 percent to 34 percent.

Price said new technology was the reason behind this. “Now bullying can happen at any time,” Price said. “Teens are hesitant to tell someone about it because they are scared or ashamed.”

What should parents do if their child is the victim of cyber-bullying? Price said to treat it like any other crime. “Treat it like a crime scene,” Price said. “The easiest way to document it is to take a picture of it with your phone. If a student reports bullying in Alabama, it is considered the same issue as if the student showed symptoms of abuse. The administration has to document it. Unfortunately, not every school system seems to know this is the law.”

Sharon Sullivan works as the counselor at Pike County High School, and she said cyber-bullying has been a problem for her. “We have a daily problem that exists,” Sullivan said. “Cyber-bullying has become more of an issue recently. On any given day, you can hear about it in the halls.”

Brenda Lampley, a mental health professional, said bullying can be devastating to a child. “We wonder why children can’t shake bullying,” Lampley said. “They lack the emotional maturity. For the kids, it becomes global. They feel there is only one solution.”

She said the best way for parents to help children is to be engaged in their lives. “There needs to be a collaboration between parents, faculty and the student so that everyone can be on the same accord,” Lampley said. “Have a dialogue. Talk to these children. One child is one child too many to commit suicide because of bullying.”

Price agreed with Lampley that parent intervention is key. “There is no silver bullet from a technological perspective,” Price said. “Parents do not need to believe there is something magical on the horizon to solve this problem. Hiding from these things will never resolve it.”