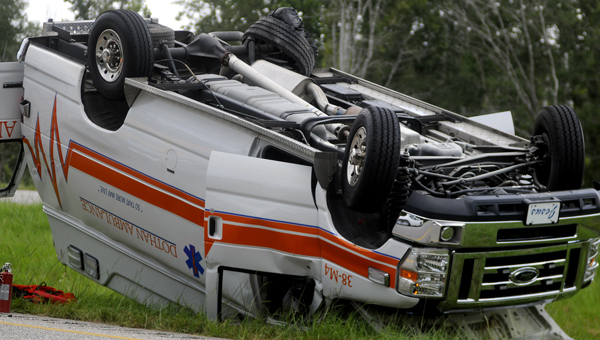 An ambulance is seen at the scene of a wreck on U.S. Highway 231 North in Pike County, Ala., Thursday, July 26, 2012. (Messenger Staff Photo/Thomas Graning)

Three people, including a pregnant patient, were injured when the ambulance they were in overturned.

The wreck happened about 2:15 Thursday afternoon at the 85 mile marker on U.S. Highway 231 in Troy, according to State Troopers.

The pregnant passenger in the ambulance was transported to a hospital in Montgomery to have her injuries evaluated. She was being taken by Pilchers ambulance out of Dothan to Birmingham when the wreck occurred.

The ambulance driver and the nurse traveling with the patient were taken to Troy Regional Medical Center for treatment of their injuries.

No injuries were reported to be life threatening.

Check back later for more details.