Two Charles Henderson High School seniors will take their talent to the next level as Gregory Barnette and Michael Fox signed baseball scholarships on Thursday.

“It feels good,” said Barnette, the Trojans centerfielder who signed with Wallace-Selma. “I’m glad to get the opportunity to play somewhere.” 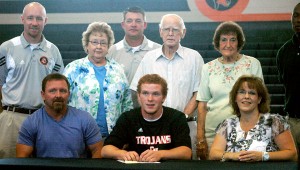 Fox, who played shortstop, inked with Jefferson Davis in Brewton.

“It feels really good to go head and punch that ticket to play college ball,” Fox said. “I was looking at a couple of schools and liked Jeff State the best.”

Barnette and Fox led the Trojans to a second round berth in the AHSAA state baseball playoffs.

Charles Henderson finished the season 26-9 and ranked fifth in the Class 5A.

“Both of these guys came up as 10th graders and played roles but have become key contributors for this program,” said head coach Derek Irons. “Greg is a guy I’m really going to miss in centerfield. He cane really go get it out there. If one gets over his head, it’s a legit base hit.”

Irons also said Fox would be missed in the middle infield.

“Michael has been able to play both shortstop and second base over the years and has really settled in to the shortstop role this year,” Irons said. “They have both been what you need seniors to be. They are leaders and are guys you can count on everyday.”

Barnette batted .375 in the regular seaosn and led the team in run scord with 40. 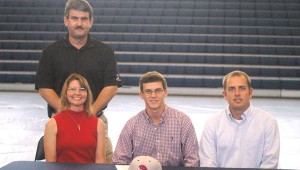 Fox hit at a .371 clip and paced the Trojans with five triples. Fox was also 5-2 on the mound for Charles Henderson with a 3.06 ERA. The college signee had a 13-game hit streak snapped in Game 2 of the Tallassee series in the first round of the playoffs.

Jefferson Davis finished 26-27 last season and was 12-18 in their conference.