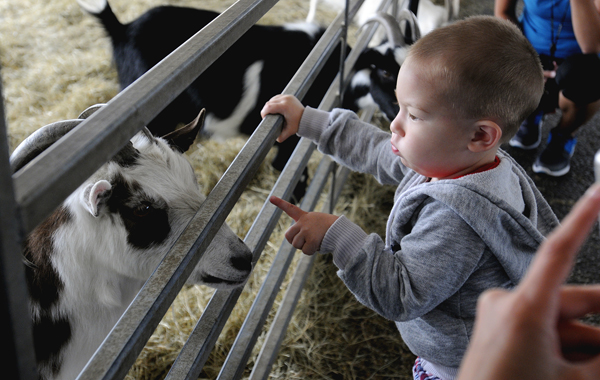 Cael Thorington pets a goat at the Jungle Safari zoo in Troy, Ala., Wednesday, April 11, 2012. The zoo is in town until Sunday evening. (Messenger Staff Photo/Thomas Graning)

Are traveling zoos good for all?

It’s hard to miss the gigantic camel standing in the parking lot of the Southland Village Shopping Center this week.

And the camel isn’t alone when it comes to attention-grabbing exotic animals brought to Troy by Jungle Safari. Exhibit owner Robert Engesser is currently traveling the country with Abu the capuchin monkey, Matilda the kangaroo, Guinevere the tiger cub and a menagerie of goats, rare big cats and lemurs.

But behind chubby-cheeked children and parents lining up to catch a glimpse of the animals lies a deeper question about the impact these traveling displays have on animals.

Desney Cameron, of Troy, was with his four children at the Jungle Safari exhibit Wednesday afternoon and said he rode by the site and then brought his kids back.

“I wanted to let them see the animals,” Cameron said. “They probably wouldn’t ever get to see tigers or a camel otherwise.”

But some animal advocates see a different side to the story.  “We encourage the public to stay away from these traveling zoos. Tigers belong in jungles, not shopping malls and parking lots, and these cubs in particular belong with their mothers,” said Debbie Leahy, captive wildlife specialist for the Humane Society of the United States. “And life on the road often means the animals are deprived of adequate care and exercise. It’s a miserable life for the animals.”

That’s a statement Engesser said he and other zoo exhibitors have heard before and it won’t deter him.

“Nine times out of 10 people understand what I am here for,” Engesser said. “But they are entitled to their opinions.”

At issue is the welfare of the animals in the traveling exhibits. Leahy cites in this case Engesser’s “troubling history of violating the minimum standards of the federal Animal Welfare Act.”

Some examples of USDA citations Leahy provided include feeding a nutritionally-deficient diet to a lion cub, failing to vaccinate a six-week-old lion cub used for public photo sessions, unsafe handling of a four-month-old tiger cub used for photos with the public, failing to treat ringworm in lion cubs who had contact with the public, failing to address stereotypic (neurotic) behavior in primates and allowing children to come into direct contact with animals without proper supervision. Other reports note Engesser has failed to provide proper animal enclosures, enrichment and veterinary care.

“Anything the USDA has reported we’ve addressed,” Engesser said, adding that he feels the word “citation” is misleading. Engesser compared USDA inspections to restaurant health inspections.

“If they see something they want changed, a report is written,” Engesser said. “Basically, if you aren’t 100 percent on everything, it has to be addressed and corrected.”

He said that includes paperwork.

A representative from the USDA did not return a phone call to elaborate on the severity of what they call “non-compliance” in their reports. However, a document explaining non-compliance shows that a license holder is given a period of time to correct any problems noted. Engesser said that’s always been done on his part.

Engesser said he’s proud of the animals in his exhibit and he’s on the road for about five to six weeks at a time with his traveling roadside zoo. Then he returns home to the Trenton, Fla., area for a short break before heading out with a different crew of animals.

“We try to go into communities where there isn’t necessarily a zoo close by,” Engesser said, adding that viewing most of the animals is free. “We try to keep it priced so that everyone can come.”

There is a $1 charge for taking a peek at some of the more rare animals, such as a black leopard and a white tiger, traveling with Jungle Safari. Photos with the smaller animals are $10 each and food to feed the petting zoo animals is $1. Engesser said the money made goes back into his big cat breeding facility in Florida where he and his wife, Patricia, raise lions, tigers, black leopards, snow leopards and white tigers.

And while Engesser said he and other big cat breeders provide a needed service supplying animals to smaller zoos and other captive facilities, some animal advocates think that service is superfluous and feeds into the overpopulation of tigers and big cats in the United States.

“It’s shockingly easy to cheaply purchase exotic animals like lion cubs in this country,” said Delcianna Winders, director of Captive Animal Law Enforcement with the PETA Foundation. She cited an ad in one publication that promoted a pair of lion cubs “handled daily in a photo gallery” for only $300. “With a surplus of big cats in the United States and no zoos to take them in, these animals are often sent to live-animal auctions where they are at risk of being sold to canned hunting ranches.”

Sonya Newman, of Troy, said she thought long and hard about bringing her grandchildren back to the exhibit after passing it earlier in the day. “I thought about the animals maybe being dangerous and the possibility of something bizarre happening,” Newman said.

In 1990, something violent did happen at one of Engesser’s traveling exhibits. The Rapid City Journal in South Dakota reported a leopard injured a 5-year-old girl while on display. However, there have been no reports of similar incidents with Engesser’s show since then.

Engesser said he has been in the animal business for about 29 years. He grew up around similar animal shows. His grandparents worked in conjunction with circuses and his parents with zoos. He said he followed suit because he’s happy to provide an “educational and entertaining” experience to families who might normally have to travel long distances to marvel at exotic animals.

But Winders’ opinion is that roadside zoos are not an example of good family fun.

“It’s really not educational to show your child an animal in unnatural or cruel conditions,” Winders said.  “All it teaches them is that we can treat animals however we want. If people care about animals they should boycott these events because otherwise they are directly supporting it.”

The owners of Southland Village Shopping Center declined to comment for this story. The Jungle Safari is in Troy until Sunday evening.