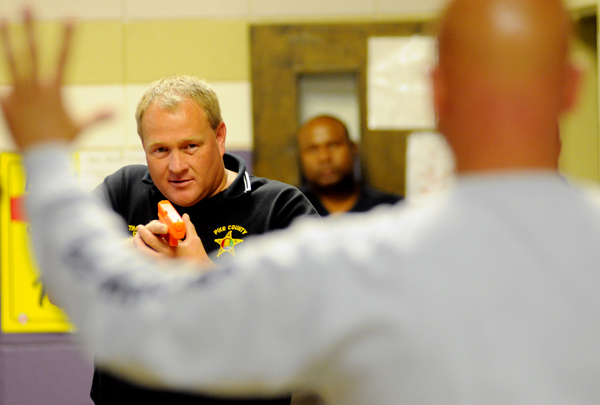 The halls of Goshen High School were filled with law enforcement officers instead of students on Tuesday.

“Our biggest active shooter event we had in Alabama was in South Alabama,” said instructor Lt. Ryan Bennett with the Alabama Department of Conservation. “There was no S.W.A.T. team close to respond.”

Bennett was referencing a March 2009 shooting spree in Geneva County that killed 10 people and four dogs before the gunman took his own life. Within a 20 to 30 mile radius, there were only a state game warden, a deputy sheriff and a couple of city officers close enough to try and end the situation.

“When people are being injured, being killed…we don’t have the luxury of waiting on a special response team,” said Lt. Gene Wiggins, law enforcement liaison with the AL DHS. “We are sworn to uphold the law and protect people. Today we are training officers how to better do that.”

WATCH A PORTION OF THE TRAINING BELOW.

Officers worked in classroom settings, and also responded to live-action scenarios given to them by instructors. As part of the two-day instruction, officers carried orange handguns that were loaded with bullets made from wax and soap. The training packet costs $47,000. It and the instruction is provided to law enforcement agencies for free by federal money through AL DHS.

“Very few places could afford this on their own, and the training is crucial,” Bennett said, adding that this is the second time AL DHS has offered the opportunity in Pike County. “Pike County got ahead of the curve. They were one of the first counties we trained.”

Officers from the Troy, Troy University, Brundidge and Enterprise police departments, the Coffee County and Pike County sheriff’s offices and the Drug Task Force learned to work together to enter buildings, breach doors and how quickly to respond to situations that could quickly become even more volatile.

“Once you go in the building to save someone’s life, there’s really no wrong way to do it, but there are better ways,” Wiggins said.

Goshen High School was available for use for the training through the Pike County School System and scheduled during spring break.

“We were glad for the opportunity,” said Pike County Sheriff Russell Thomas.

“It’s always good to stay trained and to train together. We all have the same goals, to protect people.”

There are 17,000 law enforcement officers in Alabama, Bennett said, and the AL DHS has trained about 2,000 people in the last three years.

To watch a video of the training, log on to www.troymessenger.com.