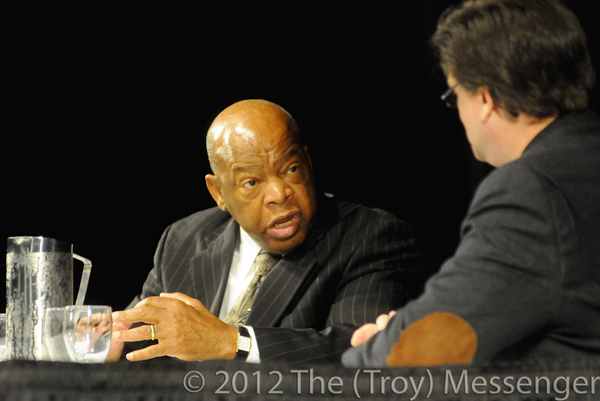 Rep. John Lewis, D-Ga., talks with Troy University assistant professor of history Dr. David Carlson during a discussion as part of the McPherson-Mitchell Lecture Series on Southern History at the university in Troy, Ala., Monday, Feb. 20, 2012. (Messenger Staff Photo/Thomas Graning)

Rep. John Lewis is considered to be one of the “Big Six” leaders of the Civil Rights Movement. He volunteered to participate in the Freedom Rides, was an architect and keynote speaker at the historic March on Washington, organized voter registration drives and helped spearhead the march across the Edmund Pettus Bridge in Selma. However, Lewis shies away from titles such as “hero.”

“I’m not a legend,” Lewis said before a speaking engagement at Troy University Monday morning. “I’m just a boy from Troy.”

Lewis visited with students, faculty and staff as part of the McPherson-Mitchell Lecture Series on Southern History at the university.

“This is returning home,” Lewis, now a Democratic congressman in Georgia, said. “I grew up only a few miles from here.”

Lewis was born to sharecroppers in 1940 and said, as he grew up in the South, he noticed signs that distinguished where whites and blacks should sit or be. Lewis said he asked why the signs were necessary and was met with a standard answer.

“That’s the way it is,” Lewis said, reciting what he was told. “Don’t get in the way. Don’t cause trouble.”

But Lewis didn’t listen to that advice. While he was at the American Baptist Theological Seminary he took part in sit-ins and other non-violent protests. In 1961, he participated in the Freedom Rides with seven whites and five other blacks.

On May 4 of that same year, the 13 Freedom Riders left Washington D.C. on Greyhound and Trailways buses. The group challenged segregation on buses and in terminals across the South. Lewis was attacked in Rock Hill, S.C. and others were arrested during the effort.

Riders were beaten relentlessly in several locations in Alabama, including in Anniston and Birmingham where a bus was fire-bombed.

“We were beaten. We were arrested. We were jailed,” Lewis said. “We didn’t give up.”

When Lewis was 23, he spoke at the March on Washington in 1963. From that time until 1966, he served as chairman of the Student Nonviolent Coordinating Committee, an organization he also helped form. In 1964, he coordinated SNCC efforts to organize voter registration drives and community action programs during the Mississippi Freedom Summer. The following year, as Lewis was helping to lead a march of 600 people from Selma to Montgomery, he endured brutal beatings and suffered a fractured skull at the hands of the Alabama State Police on that “Bloody Sunday.”

Lewis said he was in Troy Monday to let students know that they are “never too young to stand up for something you believe in. Speak up, speak out and do it without violence.”

Lewis was elected to Congress in 1986 and serves as senior chief deputy whip of the Democratic party in the House and is a member of the House Ways and Means Committee, and its subcommittee on Income Security and Family Support.

That’s a long way from his start in life in Troy where he was only thought of as a “colored” by most people.

“The only places where you can see ‘white only’ or ‘black only’ signs – or ‘white waiting’ or ‘black waiting’ are in museums or in old photographs or in videos,” he said. “When people say ‘nothing has changed,’ I say ‘come walk in my shoes and I’ll show you change’.”