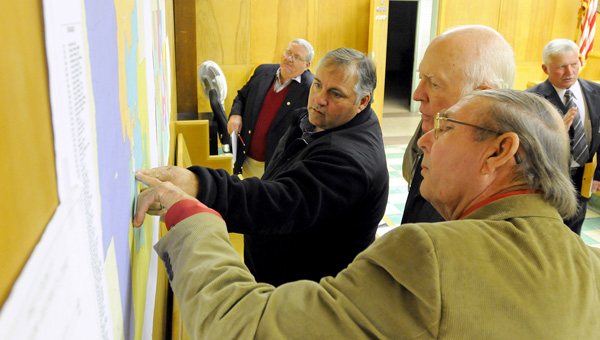 The lines have been drawn, again.

The Pike County Commission and the Board of Education held a joint public hearing Tuesday night before breaking for separate meetings where both groups approved the redrawn district lines.

The groups had initially adopted a plan crafted after reviewing corrupt data provided by a demographer. When the Department of Justice noticed discrepancies in Pike County’s data, the commission and board had to rush to redraw lines.

While there was no discussion at the Pike County Commission meeting before the plan was approved, there were concerns residents voiced during the public hearing.

“How can you wait this late to change district lines after someone has qualified?” asked Ross Paul who had qualified to run for the District 6 seat of the Board of Education. “How can you proceed with this when state law says you can’t change precinct lines three months before an election?”

Different county commissioners and employees explained that, per legal advice they’d been given, federal duty to make districts have less than a two percent deviation overrides state law.

“When you sit down in good faith and work hard … that’s all you can do,” said Pike County Superintendent Dr. Mark Bazzell, adding that it did no good to point fingers and try to blame anyone for the situation.

“We didn’t get to pick and choose,” said Linda Steed, District 4 Board of Education representative. “If we did, each one of us would have had a different map.”

Jeffrey Baker voiced his opinion that he didn’t feel it was right for a district line to separate Baker Road in District 5.

“Five or six people. I don’t think it would hurt your deviation that much,” Baker said in hopes of persuading the groups to redraw one border.

Paul also asked for a road consideration. He wanted County Road 2276 to be included back in District 6.

“I followed all the rules and regulations to qualify in District 6,” Paul said.

Some of the more notable changes are the loss of the Ebenezer Co. building in District 3 and the Henderson Fire Department in District 6 as polling places.

In the Board of Education’s meeting, members discussed the redistricting efforts for about 30 minutes before voting, Bazzell said. Earnest Green, Chris Wilkes, Wyman Botts and Herbert Reynolds voted to approve the map. Linda Steed and Greg Price voted against approval.