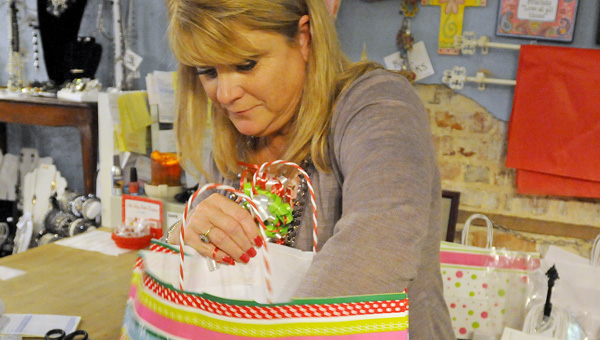 Last-minute shoppers head to stores in search of hot deals

Customers had lined up outside of Glow in downtown Troy Tuesday morning before the store even opened.

“This past week has been really, really crazy,” said Glow employee Hanna Hixon. “It’s been really steady since Thanksgiving.”

Some of the popular holiday gift items flying off the shelves at the boutique are Barefoot Dreams blankets that retail for about $100. The store has sold out of those, twice. For lower price point items, Hixon said holiday sets, such as Bliss’ Santa’s Little Helper series of spa products, have quickly left the store. Those can be purchased for as little as $11.

Emi-Jay hair ties are also in high demand. Paparazzi have snapped photos of celebrities, such as Jennifer Anniston, wearing the new hair tie. One tie costs $2.50, while a set can run customers between $11 and $14.

Around the corner at T-Marie, Pandora bracelets and charms are in high demand.

“Our sales have really been up,” said Jhermonique White, who works at the jewelry store. “Many Troy locals have been coming in for the first time.”

Grandparents buying for grandchildren, husbands for wives, girlfriends for boyfriends – just about every type of shopper has come through the door at T-Marie.

“It’s good for us to be able to provide that service to the community,” White said.

Pandora charms at the store start at $20, and the merchandise at T-Marie also includes Michael Kors’ watches and Sorelli items.

If you haven’t found the perfect item for your favorite sports fan, First Impressions on the square may be a good place to look.

First Impressions has a little something for everyone, from ornaments to pewter to children’s clothes. But, they also have a good-sized selection of Troy, Alabama and Auburn university gear. The store sells belts, shaving kits, wallets and other items with team logos.

“We really can’t pinpoint what one thing people are looking for,” said store manager Deabron Sexton. “We’re selling some of everything.”

For the outdoorsman, or woman, on your shopping list, Troy Sports Shop still has YETI coolers. Storeowner Diane Calhoun said those seem to be big sellers.“Guns are a big thing, too,” Calhoun said, “and gun accessories.”

Calhoun said they see an increase of women buyers during the holiday season and most of their shoppers are looking for higher-priced items. That means customers are mostly shopping in advance, but the store always sees a last-minute push for smaller items.

“Guys come in here in a panic at the last minute,” Calhoun laughed. “But we always help them try and find something perfect.”

Ornaments are seen on a Christmas tree at the Piggly Wiggly in Troy, Ala., Thursday, Dec. 15, 2011. (Messenger Staff... read more