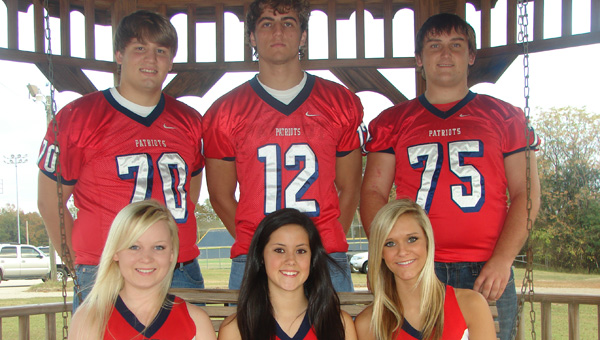 After a 6-4 season on the gridiron, several members of the Pike Liberal Arts football and cheerleading squads will compete in one last contest.

Offensive and defensive linemen Alex Pierce and Tanner Free will join running back/linebacker Nick McLaughlin for the annual showcase of the association’s best.

“They are a very deserving group,” head coach Steven Kilcrease said. “They had good seasons and very good careers and will represent our school well.”

McLaughlin rushed for 1,646 yards for the Patriots in 2011. The senior scored 20 touchdowns, 15 more than any other teammate

McLaughlin also threw for two more scored in his limited time at quarterback totaling 1,878 all purpose yards for the season.

Defensively, McLaughlin led the team in tackles with 119. He also picked up three sacks and 12 tackles for loss.

Tanner Free and Alex Pierce anchored the offensive line for Pike. Free was third on the squad in tackles with 58 with eight tackles for loss. Pierce was not far behind with 53 tackles and 10 tackles for loss to go along with his four sacks. Free also recovered two fumbles for the Patriots.

“They were great leaders for our team,” said Kilcrease. “I expect them to go out and play a good game.”

The trio helped the Patriots to a decent season defensively. Pike allowed just 19 points per contest and shutout two opponents in 2011.

The three representatives are not the only voids that need filling next season for the Patriots. In all, Pike loses 21 seniors.

“We have some big shoes to fill,” Kilcrease said. “Along with Pierce, Free and McLaughlin, all of these seniors have done a great job for us.”

Receiving the call for the Patriots cheerleading squad was Amy Fleming, Conleigh Gilmore and Samantha Shirley.

The game will be played tonight as Stanley-Jensen Stadium in Prattville. The event will feature 88 all-star football players and 48 cheerleaders. This will be the 42nd year for the contest.