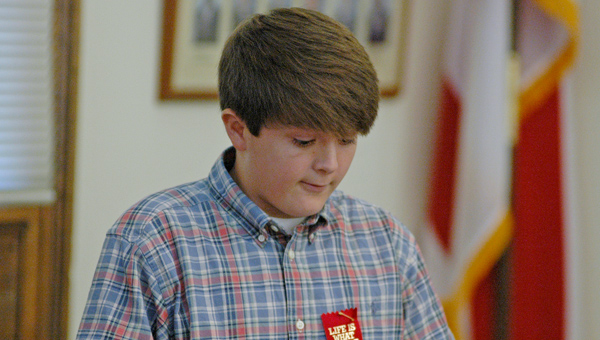 Hayes Lee took a risk when he wrote his essay for the mayor’s Red Ribbon Week contest this year.

The theme, “My Anti-Drug,” encourages eighth-graders to write about what drives them to be drug free. Many choose sports; faith; family; or other motivators.

Lee told about something else. His father.

“When I was three years old, alcohol took my father’s life from him,” the Pike Liberal Arts eighth-grader wrote in his contest-winning essay. “I grew up for 10 years without a dad and without memories of a dad. Therefore, my real dad is my anti-drug.”

Sharing the story of his father’s life and the impact it had on his life, Lee’s essay rose to the top of the contest entries.

When he read the essay at Tuesday’s Troy City Council meeting, the room fell silent. “I’ve been here 15 years, and I’ve never heard anything as powerful as that,” Councilman Jason Reeves said afterwards.

“That’s a strong boy, a moving essay,” Mayor Jimmy Lunsford said after the meeting. “We’ve never had one like that.”

Lee’s candid account of the impact alcohol abuse can have on a family or a child is sheds light on the issues raise during the citywide Red Ribbon Week. The event, coordinated through schools, partners educators and law enforcement agencies in a concerted and focused effort to warn youngsters about the dangers of drug and alcohol abuse.

At Pike Lib, assistant headmaster Dee Bennett said while much of the week centers on good natured fun – think mix-matched clothes on “Don’t Get Mixed Up in Drugs Day” – and programs and presentations coordinated by law enforcement officials, the dialog such as that sparked by Lee’s essay is the ultimate benefit.

“Just that we can have a week to talk about this when it is such a taboo topic is important,” she said. “His family was personally affected. It’s a very emotional yet profound essay …

“This week does allow peers to talk to each other and children to talk to parents about the use and abuse of alcohol and drugs.”

Sgt. Benny Scarbrough of the Troy Police said the local activities are part of a national celebration of Red Ribbon Week, held the last week in October each year. Sparked by the death of a drug enforcement agent at the hands of drug cartels in Mexico in the 1980s, the week has grown to become one of the most concentrated partnerships between law enforcement and educators.

“We have the opportunity to go into our schools and talk with young people, especially the elementary and middle school age children who are the most vulnerable,” Scarbrough said. “It makes a difference.”

At Charles Henderson Middle School, counselor Sherrie Banks has embraced the theme of the week: themed days, door contests, red ribbons all over campus. “They’re doing well,” she said. “I could tell (Monday) that the sixth- and seventh-graders were really listening to what the speakers were saying. Having someone who had been on drugs talk about the impact on their lives really hit home for them.”

And Banks said reaching out to students with the message that alcohol and drugs can destroy lives is important. “We have so many issues with students being on drugs, not necessarily in the middle school. But it starts somewhere, and the sooner we can educate our students about the dangers the better we will be.”

Bennett concurred. “Research has proven that the earlier we can educate children about the harmful effects of alcohol and drugs the better prepared they are to deal with the issue as teenagers and adults.”