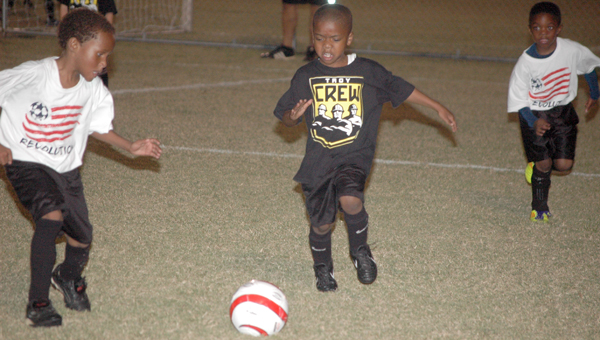 In the 7&Under division, the Revolution and The Crew, both 5-0 entering play, played to a 0-0 draw in regulation time forcing the squads into a shooout.

The Revolution (6-0) had a chance to take the lead in regulation but Alli Rushing made a save on a free-kick attempt to keep the scoreboard blank.

Tal Sessions nearly missed giving The Crew (5-1) a late advantage but his attempt hit the crossbar.

The Revolution’s Aeriel Frazier fired an on-target shot but Brady Huner made a two-handed save.

The final attempt came from the Revolution’s Skyler Kidd and he planted the ball firmly in the back right corner of the goal to give his team the victory.

In the 13&Under league, the Storm and The Crew didn’t have such a nail-biting finish as their younger counterparts.

Jack and Clay LaBrant scored two goals each to lift the Storm to a 4-0 victory.

Jack missed an opportunity to score early in the second period after he made a contested run into the box. His shot was wide, however, and scoreless play continued.

Three minutes later Jack would get another chance.

This time, on an uncontested run, Jack scored from just feet in front of The Crew’s goalkeeper.

Jack would score again in the eighth minute of the second period after he weaved through defenders and made a move to the center of the pitch. The shot attempt would land in the right corner of the net to give the Storm a 2-0 lead.

In the second half, brother Clay would take his turns wreaking havoc on The Crew’s back lines.

On the final goal, Clay took control of the ball in traffic near The Crew’s net an curled the shot into the side of the goal to ice the team’s victory.