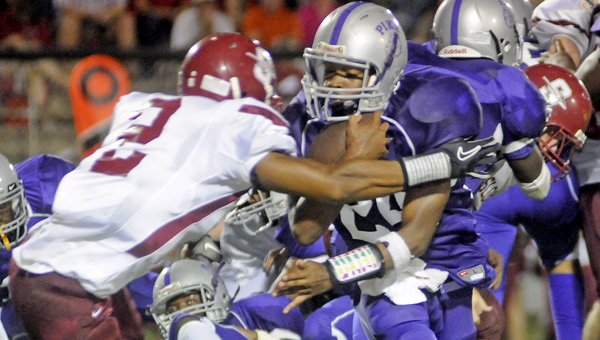 BRUNDIDGE — Sometimes a little bit of humility can go a long way.

The Pike County High School Bulldogs are experiencing the anguish of losing to opponents were accustomed to during the mid-2000s when they won three state titles in four seasons.

The Slocomb Red Tops used a power-running offense and a strong red-zone defense to come away with a 21-0 win over the Bulldogs in the Class 3A, Region 2 opener for both teams at Bulldog Stadium Friday night.

The Red Tops controlled the game from start to finish as they controlled both sides of the line of scrimmage.

The Bulldogs held their own in the second half and moved the ball extremely well between the 20s before penalties and a tough Slocomb defensive unit kept the offense out of the end zone for the second time in three games.

However, Pike County head coach Rodney Dollar said he saw some positive things from his team after last week’s disappointing 14-7 loss to 1A Notasulga.

“I found some people in purple ready to go to war,” Dollar told his team after the game. “You showed tonight you were ready to work.”

“We got beat by a better football team that’s weel coached. We played better tonight. We had chances to score. But we shot ourselves in the foot. We’re getting better. The scoreboard doesn’t mean anything right now. We’ve got to find ways to get better every week. Sometimes losing builds character.”

The Red Tops took the opening kickoff 61 yards on 14 plays burning up 5:45 of the first quarter clock for the game’s first score. Running back Devin Lovings scored from two yards out. The key plays of the drive were a three-yard run Lovings on 4th-and-2 from the Slocomb 47-yard line and 14-yard pass from senior quarterback Evan Ballard to Chad Peacock on third-and-four from the PCHS 16-yard line. The missed extra point left Slocomb with a 6-0 lead at the 6:45 mark.

The Bulldogs appeared poised to tie the game or take the lead early in the second quarter they moved the ball to the Slocomb 18-yard line. But a holding call after a first-down conversion on 2nd-and-1 stymied the drive. Three plays later, Pike County’s Raheem Pearson was stopped three yards short of the first down on 4th-and-4. The Red Tops took over on downs.

Slocomb moved the ball to the Pike County 20-yard line before Tehron Stallworth recovered a fumble for the Bulldogs at the PCHS 17-yard line to stall the drive.

After failing to pick up a first down, Slocomb got a break when the Bulldogs were called for interfering with making a fair catch moving the ball to the PCHS 22-yard line. On fourth-and-goal at the PCHS two-yard line, senior Mason Silavent scored to complete the drive. The successful two-point conversion gave the Red Tops a 14-0 lead at intermission.

On the second half kickoff, the Bulldogs momentum from a good return was short lived when Slocomb recovered a fumble at the Pike County 37-yard line. Nine okays later, Lovings broke a tackle and sprinted six yards up the middle to complete the scoring.

Pike County moved the ball to the Slocomb eight yard line and 16-yard line but was unable to put any points on the board.

Dollar said switching to the double-wing offense from the spread used during the first two weeks was a much-needed move for the Pike County offense.

“We’re trying to get better at Pike County,” Dollar said. “We’re trying to develop that mentality of physically and mentally beating an opponent. I’ve got to work on what’s right for us.”

Pike County returns to action this Friday night when it travels to Midland City to face Dale County. Kickoff is set for 7 p.m.